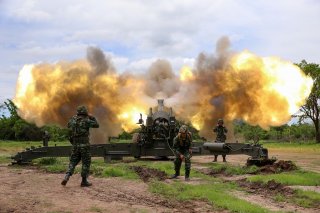 Earlier this summer, the U.S. Army announced their desire to acquire a longer-range, more mobile howitzer system that could replace the current Army fleet of towed howitzer pieces. In an open call for participants, the Army specified that candidate systems would participate in a shoot-off evaluation competition in 2021 at the Army’s Yuma Proving Ground in Arizona.

Though the prototype designs that entrants chose to submit are not determined by the Army, the entrants are able to use a U.S. Army-supplied M776 Cannon Assembly. One line of the call for entrants titled “Government Furnished Equipment” states the following:

“The USG recognizes the risk of US ammunition compatibility with foreign cannon systems, so the USG will provide a M776 Cannon Assembly, currently used on M777 Towed Howitzer and qualified with all US ammunition, to vendors who wish to utilize it in their Shoot-off Evaluation system. Providing the M776 Cannon as GFE is contingent upon the contractor having a viable integration concept for its use.”

Though using an Army-suppled main gun is not a requirement, it is a boon to foreign firms that would like to participate and indicates a willingness by the Army to buy foreign tech, though in the past they've bought American.

The Army currently fields around 1,000 M109 Paladins, the current American self-propelled howitzer. The platforms rely on a four-man crew and were originally fielded during the Vietnam War, though the most up to date variant, the M109A7, features a number of upgrades over its predecessors, including a superior armor protection package, and a higher rate of fire. It also shares a number of components with the Army’s Bradley Fighting Vehicle for a better logistical footprint and associated cost savings.

Still, the M109A7’s rate of fire is not as fast as other self-propelled howitzer systems, its sustained rate of fire is just one round per minute, which can jump to four rounds per minute for short periods of time.

Many other self-propelled howitzers can do better.

A number of firms both based in the United States and abroad are interested in the program. One entrant who is considered a strong contender, Elbit Systems’ Autonomous Truck Mounted Ordnance System (ATMOS) Iron Sabre is extremely quick: it can set up, fire off a round, pack up, and be moving elsewhere in just one minute. This so-called shoot-and-scoot ability is particularly valued on battlefields and can prevent enemy forces from pinpointing artillery locations.

Another favored participant, BAE System’s Archer, is highly mobile and much faster than the Paladin. Thanks to a much more modest armor package — the Archer is essentially a 155mm howitzer mated to a large truck — it can reach road speeds of 45 mph. It can also fire off rounds lighting-fast. The Archer carriers 21 rounds, all of which can be fired in 2 minutes, 30 seconds.

Yugoimport, a Serbian company, as well as BAE Systems, have also been asked to provide the Army with prototypes. AM General, the maker of the iconic Humvee has also expressed interest, as has Nexter, a French defense firm.

Get Ready: The Army's Upgraded M109A7 Paladin Artillery Is Going Into Full Production