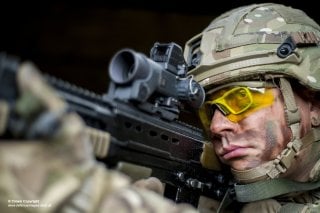 Here's What You Need to Remember: If ultimately proven successful, the emerging material could have a range of combat essential functions, protecting soldiers’ heads, bodies, boots and even extremities.

Staying alive in close-quarter combat, infantry soldiers will tell you, requires a lot more than body armor; infantry has to maneuver, take cover, quickly assist fellow soldiers and in some instances, jump from rocks or building to avoid lethal enemy fire. In short, survivability also depends greatly upon “speed”...and “weight.” As part of this, fatigue is a realistic variable. How can infantry soldiers be expected to perform with 100-percent of their abilities after hiking for five hours through mountainous terrain -- while carrying more than 100-pounds of gear.

U.S. Army infantry soldiers prioritize physical fitness, but how much faster could they maneuver wearing new material that is 14-times more effective than current body armor? This goal forms the principal inspiration for a current Army Research Lab effort to engineer a new kind of lightweight armor -- intended to be 64-percent more impact resistant than steel and up to eight times lighter than current armor.

Current Army soldier body armor, call the Improved Outer Tactical Vest, can weigh as much as 35 pounds. Much of it is made of synthetic fibers such as Kevlar or Dyneema with either metal or ceramic trauma plates.

The new material being used is a reconfigured variation of - Ultra High Molecular Weight Polyethylene - a plastic-like composite material known for its durability and toughness against extreme force such as hard-object penetration and explosive impact. Variants of the material are widely used in common materials such as the plastic-like milk-gallon cartons or even joint replacements such as artificial limbs in humans. Scientists define the material, called UHMWPE for short, as “a linear (non-branching) semi-crystalline polymer which can be described as a two phase composite of crystalline and amorphous phases.”

The material now being tested, however, is designed to engineer a new kind of UHMWPE that is 10-to-20-times more resistant than off-the-shelf UHMWPE; this is accomplished through an elaborate scientific process designed to create “microscopic structural variations” in the composition and thickness of the material, Runnerstrom said.

These new variations are created, Runnerstrom said, by combining differently configured polymer strands into integrated “hard & soft” material. On one side, polymer strands are both elongated and hardened together -- while the other side is engineered to be softer and amorphous. This is done to generate a specific, high-value impact.

“On one side the structure is still crystalline polymer. As you move through the thickness of the material, it becomes more amorphous and disordered. It becomes softer. This smooth transition between softness and hardness gives it the ability to absorb impact and dissipate energy,” Runnerstrom said.

On the hardened side, long polymer are arranged together; the “sheets(polymer) are lined up and very well ordered,” as Runnerstrom put it.

“The other (soft) side becomes amorphous polymer which is not as well lined up or stiff anymore. It allows the material to dissipate energy from an impact to the material, as opposed to a material that is only stiff or only soft,” Runnerstrom said.​

Interestingly, an essay from the National Library of Medicine, National Institutes of Health takes up the topic addressed by Runnerstrom and reinforces his point about how altering the “mechanical properties of polymer” can impact how the material behaves.

“The mechanical properties of the polymer are dependent on both its crystalline and amorphous phases. Altering either phase (i.e., changing overall crystallinity, crystalline morphology, or crosslinking the amorphous phase) can affect the mechanical behavior of the material,” the essay, called “Ultra High Molecular Weight Polyethylene: Mechanics, Morphology, and Clinical Behavior,” states.

By extension, the paper seems to also address the protective impact of “stiffening” or “hardening” some of the polymer crystalline strands.

The work is being performed the ARL and research scientists at the University of Buffalo. Prof. Shenquian Ren, who leads the effort, writes that altering “thermal” or heat properties of UHMWPE can change its performance, further reinforcing how different polymer strands can be altered and combined to engineer more resistant materials.

The inspiration for this UHMWPE configuration, now being pursued by Ren, can be traced to nature - clam shells and pearls in particular. Runnerstrom explained that a natural material, called Nacre for calcium carbonate, forms the smooth iridescent material found on the interior of a clam or the outer layer of pearls. It is comprised of “small individual crystal and carbonate platelets,” Runnerstrom explained. The small calcium platelets are held together by a “mix of proteins.”

“Instead of using calcium carbonate they are using UHMWPE,” he added, referring to the new effort.

“The exciting thing is by using bio-inspired materials we can design the microstructure of materials that are already known and can be manipulated to give us greater performance,” Runnerstrom said.

Overall, the effort could be described as future-reaching Basic Research, and scientists say this material may still be five-years away. However preliminary laboratory testing shows the “material does not break and nothing passes through to the other side.”

There has, as of yet, not been ballistic testing. Nothing has been fired at it, however once the initial results can be tested on a larger scale, it is believed that the results will be similar to the promising initial findings discovered in the laboratory.

If ultimately proven successful, the emerging material could have a range of combat essential functions, protecting soldiers’ heads, bodies, boots and even extremities.

Ren’s research paper on the topic explains the ultimate goal of the research.

“The body armor materials have been designed for body protection by absorbing energy from deflecting the slashing, bludgeoning, and penetrating attacks under the ballistic shock,” Ren writes.