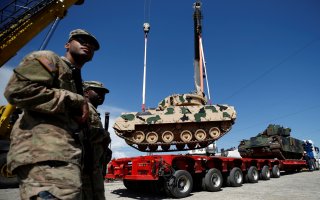 Here's What You Need to Know: The Army’s biggest and baddest troop carrier might get even bigger.

Late in January 2018, Shephard Media journalist Grant Turnbull published a tweet with an image describing more extensive upgrades to the Bradley turret and hull, which are separately expected to take between four and five years to develop. The U.S. Army has allocated $600 million for development and component purchases for the new model, a sum likely to increase once a new defense budget is released. It is not clear if the Pentagon will seek to implement only one of the improvements or pursue both at once.