U.S. Battleships Turned into Aircraft Carriers?—a What If That Almost Became Real 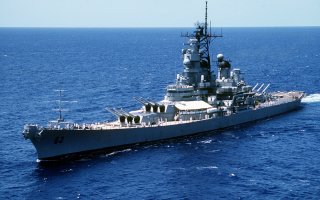 Here's What You Need To Remember: Today all four Iowa-class battleships are scattered across the United States serving as floating museum ships. New technologies such as lasers and railguns will almost certainly spark a new wave of calls for reintroducing the ships with twenty-first century technologies.

In the early 1980s, the Reagan Administration was looking to fund high-visibility defense programs. Reagan had been elected on a platform of rebuilding the armed services after the “hollowing out” of the early 1970s.

One example was the reactivation of four World War II-era Iowa-class battleships, which started in 1982. Each of the four ships, Iowa, Missouri, New Jersey and Wisconsin was refurbished, their sixteen and five-inch guns brought back online. Each battleship was also equipped with sixteen Harpoon anti-ship missiles, thirty two Tomahawk land attack cruise missiles and four Phalanx close-in weapon systems (CIWS) for defense.

In the November, 1980 issue of the United States Naval Institute Proceedings, Captain Charles Myers, USN (retired) proposed reactivating the battleships with significant modifications to the aft section. The proposal envisioned deleting the number three turret near the stern and the three sixteen-inch guns housed in it.

Kyle Mizokami is a writer based in San Francisco who has appeared in The Diplomat, Foreign Policy, War is Boring and The Daily Beast. In 2009 he cofounded the defense and security blog Japan Security Watch. This article is being republished due to reader interest.