The U.S. Can Wage War By Remote Control But It Can't Win Them 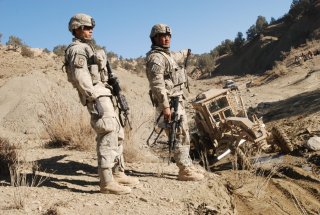 Here's What You Need to Remember: Remote war is remote in more than the technical sense that operators may hit hostile forces with unmanned aircraft, cyberattacks, and other means that don’t expose them to personal risk. It’s remote in the political sense. Precisely because U.S. military folk are exempt from harm, war can rage on faraway battlefields while arousing little public sentiment—or even interest—back home.

War is a deeply human undertaking. Trying to take human beings out of it is fraught with unintended consequences. I had a similar inkling about the future after Desert Storm, where Swofford and I both deployed. In March 1991, to herald the armistice, a Navy Times headline blared out that the “ghost of Vietnam” had faded in the desert as U.S. expeditionary forces displayed “unrivaled military might.” That was a bold claim. It was also a plaintive way to announce a victory. Why situate a freshly won triumph in the context of a past defeat?

Because military folk still fretted constantly about losing in Southeast Asia. The ghosts of Vietnam, better known as the “Vietnam Syndrome,” had haunted the U.S. armed forces since the downfall and destruction of South Vietnam almost sixteen years before. President Richard Nixon, who presided over the denouement in Indochina, reputedly coined the phrase to describe a malaise afflicting the American armed forces, government, and society.

Believers in the Vietnam Syndrome regarded it as a cultural impediment to martial success.

The basic idea was that the American people had grown casualty-averse since the world wars, system-shattering conflicts that directly threatened North America. Citizens might lend their support to foreign adventures of less consequence for the national interest, only to withdraw it once costs mounted and body bags started coming back home in large numbers. They were inconstant. A democratic society cannot make war at substantial cost, for a long time, without that all-important popular backing. Hence the Vietnam debacle and its aftereffects.

Navy Times was wrong. U.S. forces indeed put on a display of high-tech firepower in the Persian Gulf, including the first combat use of unmanned aerial vehicles—now the emblem of remote war. But Desert Storm did not vanquish the ghosts of Vietnam. At most, it appeased them.

The new American way of war was designed to garner quick victories at trifling cost in American military lives. It did so by substituting advanced weaponry for blood. Rather than conquer the premise underlying the Vietnam Syndrome, that is, the framers of the new way of war accepted that premise and worked around it. And by pummeling the Iraqi Army, executors of the new strategy left ordinary folk convinced that warfare was speedy and bloodless by nature. All future wars would be Desert Storms, fast, pain-free, and exhilarating.

This is the fallacy to which Swofford objects. He delivers a three-part verdict. The first part involves expediency. High-tech warfare might deliver the goods in a conventional fight such as the Persian Gulf War. Its promise is shakier in theaters such as Vietnam or Afghanistan, where antagonists don’t clump into big units that can be easily detected, tracked, and targeted. They spread out into isolated bands, mingle among the populace and terrain, and refuse to fight America’s fight.

Antagonists are perverse that way. They have their own agendas and their own war-making methods. They need not conform to ours—and should not if they want to win.

In that sense the Taliban, al Qaeda, and kindred armed groups are arch-Clausewitzian. Prussian master Carl von Clausewitz warns that war is an interactive struggle of wills between foes with every incentive to harness their strengths, bypass enemy power, and hammer away at enemy frailty. Irregular armed groups could never match up against a conventional adversary, so they do something different. And betimes prevail.

And yet armed groups are counter-Clausewitzian in a crucial way. He writes principally for conventional armies bestriding conventional battlegrounds. An army cast in the traditional mold, he opines, exhibits a “center of gravity.” Sage field generals acquaint themselves with their antagonist, locating its center of gravity. They concentrate force. Then they aim “blow after blow” at that focal point until the foe capitulates or can resist no more.

Like all combatants, any irregular armed group has one or more centers of gravity. But its centers of gravity are less tangible and thus more elusive than an army’s physical mass. Popular support is one. The ability to resupply from the countryside and the population is another. Getting at these sources of power and cohesion is a far different matter from brawling with a massed army glaring at you across the field of combat.

Swofford doubts eyes in the sky can espy and apprehend a dispersed, will-o’-the-wisp quarry—even with help from modern air and ground forces. His critique is tough to gainsay considering the lackluster results in Afghanistan and like theaters.

Here again, the example of Vietnam applies. Soldier John Paul Vann once quipped that the prime weapon for battling Viet Cong insurgents was a knife. Knife fighting brought U.S. troops face to face with the foe and thus was more discriminate than the worst tactics, namely long-range artillery and aerial bombardment. There’s wisdom in Vann’s jest. Today as in the Vietnam era, there is no substitute for getting out among the populace, gathering information, and ferreting out insurgents. It is more precise and makes fewer enemies.

Swofford’s second point is political. Remote war is remote in more than the technical sense that operators may hit hostile forces with unmanned aircraft, cyberattacks, and other means that don’t expose them to personal risk. It’s remote in the political sense. Precisely because U.S. military folk are exempt from harm, war can rage on faraway battlefields while arousing little public sentiment—or even interest—back home.

If war is distant from daily life, it stokes the same popular ardor that everyday governmental functions like enforcing law and order and maintaining infrastructure do. People regard these functions as important but routine—and routine chores fire little passion. Distant war likewise engenders complacency and forgetfulness.

The prospect of protracted but ho-hum warfare would puzzle Clausewitz, who held that three “dominant tendencies” make war a “paradoxical trinity”—namely “primordial violence, hatred, and enmity, which are to be regarded as a blind natural force”; the “play of chance and probability within which the creative spirit is free to roam”; and “subordination” to policy, which makes war “subject to reason alone.”

Reason and inventiveness are essential to warmaking, in other words, but a belligerent not fueled by some measure of dark, primal passions is short an element of the trinity. It is a lackadaisical belligerent. How does a halfhearted contender wage war seemingly without end? Simple: by keeping the cost of the endeavor low.

Holding down the expense appeases an indifferent electorate. Clausewitz maintains that the value of the “political object”—a.k.a. the goal—determines the “magnitude” and “duration” of the effort a contender mounts to obtain its goal. The magnitude is the rate at which the political and military leadership expends lives, military hardware, economic resources, and diplomatic capital. Duration is how long it keeps up the expenditure.

Multiplying the rate by the time reveals the total outlay for the enterprise. A rational combatant proceeds if it finds the pricetag acceptable, foregoes the effort if not. Now, by definition an apathetic combatant cares only tepidly about its war aims. By Clausewitzian logic, it balks at spending on them lavishly or for a long time. And yet U.S. forces have been fighting in Afghanistan for eighteen years without triggering serious blowback.

How? Remote warfare substitutes technology for military manpower, carrying the Desert Storm philosophy to its utmost. Think about raw numbers. The National Archives lists 58,220 combat deaths for the Vietnam War. A mere 143 fell in the Persian Gulf War, while 1,847 have fallen in action in Afghanistan. Such figures are unlikely to provoke a backlash. They permit an apathetic society to fight for a long time—but not to fight to win.

Swofford’s last point relates closely to his second, and it centers on morality and ethics. “When you rely on a myth of technology and distance killing to build a rationale for easy war,” he says, “your country will lose its soul.” Making war easy and apparently cost-free disguises the fact that it entails enormous costs for the opponent, and for inhabitants of whatever country or region constitutes the battleground. War happens among them.

Supposedly a prophet of blood and iron, Clausewitz warns against undertaking war lightly. “Kind-hearted people might of course think there was some ingenious way to disarm or defeat an enemy without too much bloodshed, and might imagine this is the true goal of the art of war. Pleasant as it sounds, it is a fallacy that must be exposed.” One imagines he would remind posterity that war remains a dangerous business for others, even if technology has made it painless for Americans by contrast.