This U.S. Carrier Is Still a Force to Be Reckoned With 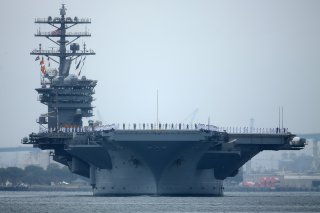 Here's What You Need To Remember: Following three catastrophic carrier accidents during the 1960s, the Nimitz-class was designed to be especially resilient to damage and has three hangars separated by heavy steel doors to prevent fires from spreading.

These floating airbases are loaded with dozens of advanced warplanes and can launch up to 150 sorties per day. No other nation has deployed a nuclear-powered supercarrier of comparable size and striking power—and the United States Navy operates eleven of them.

All but one of those carriers belongs to the Nimitz-class, a design which until 2017 was the largest vessel ever built, with a hulking displacement exceeding 113,000 tons loaded and a ship’s company of 3,200.

For comparison, carriers in service with Russia, China, and India featured an upcurved “ski-jump” ramp which significantly limits aircraft takeoff weight, while other navies rely on lower-performing vertical-takeoff jump jets.

Following three catastrophic carrier accidents during the 1960s, the Nimitz-class was designed to be especially resilient to damage and has three hangars separated by heavy steel doors to prevent fires from spreading. These and other safety measures have prevented major disasters on the Nimitz carriers, though fatal landing accidents inevitably still occur.

Flight activities are coordinated from a control tower situated atop a superstructure on the rear right-side of the carrier called “the island.” The island also houses no less than fourteen different radars specialized in tasks ranging from flight control, air defense, and missile targeting.

Carriers invariably deploy with a task force of around a half-dozen escorting frigates, destroyers, cruisers, and usually one attack submarine. These vessels act as sentries to hunt down submarines and bombers before they get to close, provide a long-range air defense umbrella, and even serve to divert missiles and torpedoes towards themselves to protect the carrier.

While carriers never want to engage enemies directly, they do have short-range defenses to thin out any missiles or aircraft that make it through the gauntlet. These include radar-guided Sea Sparrow missiles (range twelve to thirty miles), super-rapid firing radar-directed auto cannons called Close-In Weapons systems, and on the Reagan and Bush, cheap, short-range Rolling Air Frame missiles in twenty-one-cell launchers. Additionally, the carriers employ multiple electronic warfare and anti-torpedo systems to misdirect incoming munitions.

A carrier’s real values lie in its aircraft, which are administratively grouped in a separate unit called the Carrier Air Wing incorporating nearly 2,500 aviators and support personnel. These have evolved considerably over the years, including the integration of female aviators and Marine Hornet squadrons. Originally, the Nimitz-class carried over a hundred specialized aircraft: speedy, heavily armed F-4 Phantom and F-14 Tomcat jets designed to intercept enemy aircraft (and double as recon jets), and slower A-6 Intruder and A-7 Corsair bombers for pounding surface targets.

However, there are concerns that the aircrafts’ five hundred and seven hundred miles combat radiuses will force carriers to come dangerously close to enemy shores. New long-range ground-based ballistic missiles, air, and sea-launched supersonic cruise missiles, and very quiet yet inexpensive AIP-powered submarines pose major new challenges to the carrier’s survivability in littoral waters, and their role in a high-intensity conflict in the Western Pacific is subject to debate.

The Nimitz-class flattops were built to serve for a half-century, which means the Nimitz is scheduled for retirement in the 2020s, to be replaced by carriers of the new, $13-billion Gerald Ford-class, which boast fancy electromagnetic catapults. However, in order to maintain a twelve-carrier Navy, the Nimitz and its sister ships may see their service lives extended. One way or another, Nimitz-class supercarriers will continue to sail the world’s oceans well into the mid-twenty-first century