The U.S. Has a Crucial Export to China: Education 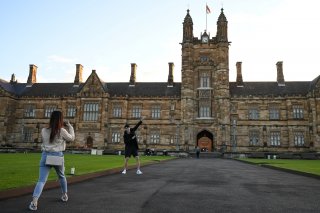 As discussed in my recent Policy Analysis on U.S.-China economic engagement, today’s critics of engagement often overstate the harms caused by Chinese goods imports in the years following China’s accession to the World Trade Organization (a.k.a. the “China Shock”) while ignoring trade liberalization’s many benefits during the same period. A new Working Paper from the Center for Global Development drills down on one such benefit: increased U.S. higher education exports to China (i.e., Chinese students attending U.S. colleges and universities). The paper’s abstract summarizes the authors’ findings (emphasis mine):

We highlight a lesser known consequence of China’s growth and integration into the world economy in relation to the United States: the rise of services trade. We demonstrate that the US’s trade deficit in goods cycle back as a surplus in exports of education services. Focusing on China’s accession to the World Trade Organization, we show that Chinese cities more exposed to this trade liberalization episode sent more students to US universities. Results indicate that growth in housing income/​wealth was an important channel that allowed Chinese families in the top of the income distribution to afford US tuition, consistent with large growth in the share of Chinese students who financed their studies using personal funds. Other mechanisms, such as changing returns to education or information flows, appear to play less of a role. We also inform distributional consequences for the US. Trade liberalization relatively induced increases in the shares of Chinese students studying non‐​STEM fields and attending less‐​selective US universities. Student inflows were similar in destinations with low and high levels of human capital, indicating that educational exports dampened regional inequalities. Our estimates suggest that recent trade wars could cost US universities around $1.15 bn in tuition revenue.

Put simply, many of the dollars that Americans sent to China for low‐​skill manufactures returned to the United States in the form of Chinese students’ “full‐​sticker price tuition payments” at colleges and universities around the country. This, in turn, benefited not only those institutions, but also their American students and surrounding communities. (Chinese students, of course, also benefited, as did the United States more broadly.)

Maybe someday the vocal critics of past U.S. engagement efforts might acknowledge these (and the many other) past gains, as well as the future harms of potentially “decoupling” the two economies, but I’m not holding my breath.