U.S. Hypersonic Weapons Pale In Comparison To China And Russia's 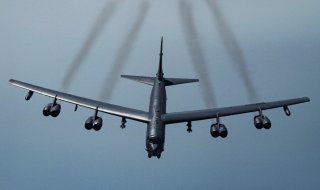 Here's What You Need to Remember: The U.S. military is deploying a slew of hypersonic systems that are expected to reach operational maturity by the turn of the decade. Unfortunately, both China and Russia have already fielded hypersonic weapons.

Earlier this year, the U.S. Air Force (USAF) conducted the first booster flight of the long-range hypersonic AGM-183A Air-launched Rapid Response Weapon (ARRW). USAF noted in a statement that the missile did not “complete its launch sequence” from a B-52H Stratofortress bomber, and was subsequently returned to Edwards Air Force Base in California.

The ARRW setback made a big splash among foreign defense observers, but none took as keen an interest in the failed launch as Russian commentators. The news was picked up by a slew of major Russian media outlets and reported on cable TV. Dmitry Kiselyev, one of Russia’s most prominent news anchors, devoted an entire segment of his weekend show to highlighting Russia’s military might vis-à-vis the United States. “If we were to reconstruct Biden’s thoughts, the failed test of America’s hypersonic airborne missile must have been chilling for him. The missile has not yet flown once. For all intents and purposes, it does not exist,” he said. “The first mock-ups were taken to the air by planes. When they decided to finally launch this missile from a B-52 on April 6 . . . the product didn’t even turn on, let alone detach. Disgraceful. Biden was upset. He grieved for a week. And maybe he remembered how his mentor Barack Obama refused to go to war with Russia even over Crimea,” Kiselyev added, referencing ongoing tensions between Russia and Washington over the Donbass conflict in Ukraine.

“Biden, as a way of putting it, blinked first,” Kieseliev continued. “At some point, even Joe Biden understood that America’s security guarantee to Ukraine is essentially a bluff. America will not go to war over Donbass. And if it does, [it will suffer a] defeat so shameful that it will lose face even before its allies in NATO and across the world. What would the U.S. security guarantee be worth after that? And how, after this, could [the United States] threaten anyone or remain solvent?”

Retired Col. Viktor Litovkin gave a less politically-tinged, but still pointed assessment to Russian outlet Izvestia. “No missile, no aircraft, flies on the very first time. There is always a testing period, mistakes and failures will occur . . . however, Americans have boasted of their hypersonic weapons, their hypersonic missiles, for the last twenty years—and still cannot accomplish anything.” Litovkin maintained that, with Russia’s Tsirkon, Kh-47M2 Kinzhal, and Avangard systems already in service, it will take the United States another ten years to catch up with Russia’s hypersonic weapons capabilities. Shortly following the failed ARRW test, Russian outlet Tsargrad touted these systems as “three blows to America’s self-confidence.”

The U.S. military is deploying a slew of hypersonic systems that are expected to reach operational maturity by the turn of the decade. Unfortunately, both China and Russia have already fielded hypersonic weapons.

Not only does the United States currently lack parallel capabilities, but it may not have a reliable means of countering these threats. Testifying about the challenges posed by Chinese and Russian hypersonic weapons programs, former Under Secretary of Defense for Research and Engineering Michael Griffin said that Washington does not “have systems which can hold them [China and Russia] at risk in a corresponding manner, and we don’t have defenses against those systems.”

Mark Episkopos is a national security reporter for the National Interest. This article is being reprinted due to reader interests.