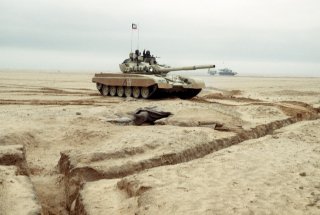 Here’s What You Need to Remember: Douglas Macgregor, who was the operations officer of Second Squadron 2ACR during the Battle of 73 Easting, wrote in his newest book Margin of Victory that despite the tactical victory we achieved, “It is another reminder that without effective strategic direction, battles such as 73 Easting can be won” on the tactical level and lost at the strategic level. Unless more members of the military go back and learn the right lessons from Desert Storm, we may find ourselves losing a future war that we should otherwise win handily.

On December 17 in 1990, I was a second lieutenant with the Second U.S. Armored Cavalry Regiment (2ACR) in the Saudi port city of Jubail, feverishly preparing my armored fire support vehicle for the coming ground campaign against the Iraqi troops that had invaded Kuwait the previous August. 2ACR had been designated as the vanguard of the U.S. VII Armored Corps, ordered to lead theater commander Gen. Norman Schwarzkopf’s armored thrust into Saddam’s strongest combat divisions, the Republican Guards, in northern Kuwait. I had been an officer in the Army for barely a year.

In early January 1991, our unit departed the friendly confines of Jubail for the open deserts near the border with Kuwait. We began a series of large-scale maneuvers including thousands of troops and literally hundreds of Abrams tanks, Bradley Fighting Vehicles, and other armored vehicles spread out over scores of square miles. Even before the 2ACR left our base in Germany, we knew the UN Security Council had passed Resolution 678, which issued an ultimatum to Saddam.

It demanded that Iraq withdraw from Kuwait by January 15, 1991, or states allied with Kuwait will be authorized “to use all necessary means to uphold and implement” UNSCR 660, which demanded that Iraq “withdraw immediately and unconditionally all its forces” from Kuwait. On January 12, Congress gave President Bush the authority to wage war against Iraq if it did not withdraw by the deadline. Meanwhile, six thousand miles from the Capitol building and four days later, the engine in my armored vehicle blew out and had to be replaced.

But the days passed and then turned into weeks. Still no attack order was given. Our anxiousness had turned to annoyance, and finally something close to anger. In mid-February 1991, we were told by VII Corp headquarters that the time to assault across the border was growing close. We were like pit bulls with our ears pinned back, eager for the green light. Then on February 21, over Armed Forces Radio we got the news that hit us like a sucker punch to the gut: Mikhail Gorbachev, the Soviet premier, had made a diplomatic overture to Saddam Hussein, in consultation with President Bush, that might result in Iraq’s withdrawal.

We were sick. Literally. Many of us lay disconsolate while awaiting the outcome of the negotiations, fearing that Iraq would accept the Soviet proposal. The thought that after deploying halfway around the world, training for two months in the Saudi deserts, and being poised within sight of the Iraq border for an attack, we would then be told to stand down, pack up and return without having fought was nauseating. Saddam Hussein himself, however, soon quashed those concerns.

On February 24 my commander, then Captain H.R. McMaster, made a radio call to all battle stations of Eagle Troop: “Gentlemen, the moment we’ve all been waiting for has arrived. We have been given the order to attack.” Again, there was nothing like fear among most of us troopers. It was closer to elation.

The initial breach across the border defenses proved to be anticlimactic because, after substantial artillery bombardment with 155-millimeter shells and multiple air strikes, the engineer bulldozers that plowed their way through the dirt berms and defensive works revealed no enemy troops defending the other side. We spent the rest of that day through the following night mainly conducting long, intensely boring road marches to get to the northern part of Kuwait. There were a few skirmishes against Iraqi armored patrols, but nothing of note. February 26, however, proved to be pivotal for the entire battle.