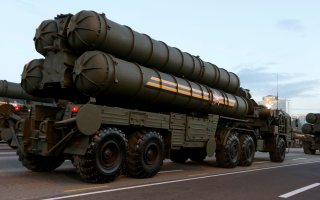 Here's What You Need to Know: Any country strengthening ties with Russia is likely to inspire some measure of U.S. concern.

Iran and China are among the group of nations known to operate Russian-built S-400 air defenses, a scenario which has of course inspired attention and concern from the U.S., particularly given the chance that they might be upgraded.

However, what about India and Turkey? They are also among the group of S-400 customers, yet they are U.S. allies, a circumstance which led several reporters to ask U.S. Defense Secretary Lloyd Austin if he was concerned that they might seek to acquire more? Would they be sanctioned?

During his recent trip to India, Austin addressed reports that India may be contemplating a new purchase of Russian air defenses. Regarding any potential future S-400 acquisition considerations, Austin encouraged countries weighing such a possibility to “move away from that and really avoid any kind of acquisitions that would trigger sanctions on our behalf.”

Austin did not dismiss the possibility that India might ultimately seek to acquire the system, he did say that there has, at least as of yet ”been no delivery of an S-400 system,” adding that he and the Indian Minister of Defense did address the U.S. concern.

The Indian circumstance is closely mirrored by Turkey, a U.S. ally currently reported to be considering acquiring the Russian-built S-400.  In response to Turkey, Austin’s comments aligned closely with his position on India, saying that there would be no need for sanctions given that no S-400s have actually been acquired.

Austin did add that some more recent allies may, simply due to the passage of time, possess some Russian equipment, a scenario which may not present a major impediment to continued cooperation with the U.S. Even India, for example, is reported by multiple news organizations to have made a deal to buy Russian S-400s as recently as 2018.

How serious are the U.S. concern regarding the international sale and global proliferation of advanced Russian S-400 systems, given that the U.S. operates F-22s, F-35s, and B-2s reportedly able to elude detection from these systems?

Any concern about this phenomenon, which Austin said could in some cases lead to U.S. sanctions, is likely twofold in that it may be both geopolitical and military.  Naturally, any country strengthening ties with Russia, in any capacity and especially in the context of acquiring weapons systems, would be likely to inspire some measure of U.S. concern, yet there are clear military concerns that may be even more pressing when it comes to countering Russia or China.

S-400 air defenses, which Russian media at times claim can track and hit even stealthy platforms, are known to have become much more technically advanced. The nodes are not the only mobile but also increasingly networked with high-speed digital processing technology, enabling one detection location to quickly share tracking data with another. This is quite significant given that, particularly in the case of the F-22 and F-35, speed itself, as manifest through an ability to instantly shift position in the skies and maneuver out of range, is a sought after tactic when it comes to avoiding detecting by flying away from or “out” of a radar field of view. However, should one S-400 radar aperture or detection envelope operate with an ability to quickly send tracking data to another, enemy air defenses might have a better opportunity to establish a continuous “track loop” and move closer to actual “engagement.”