The U.S. Military's Plans to Build an Exoskeleton for Soldiers 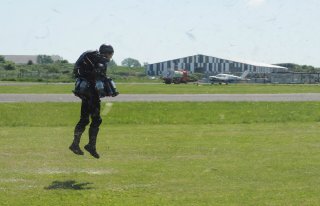 Here's What You Need to Remember: The TALOS design included internal heating and cooling with adaptive temperature control based on the climate the operator is in. This meant that the soldier in the suit can maintain a lower body temperature while performing tasks in a desert environment, thereby decreasing his fatigue.

The armor was also next-generation with a specialized fluid being a major component of the system. If you’ve ever mixed cornstarch and water, you have an idea of how this armor design works. The fluid maintains a low-density state until it’s impacted. Then it hardens instantly, stopping the bullet. The suit was also said to come with a slew of other features to increase comfort and gather health information.

The TALOS project wasn’t likely to be used for every single infantryman though. The design was primarily created with the pointman in mind. Perhaps in the future, we’ll see TALOS resume development, but for the time being we’ll have to watch other countries develop their own “Iron Man Suits.”

This article was first published earlier this yeaer and is being reposted due to reader interest.