The U.S. Must Stop China's "Wolf Warrior" Diplomacy - Before It's Too Late 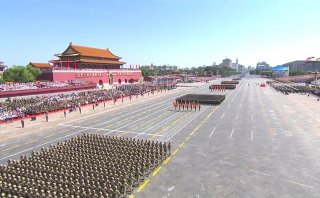 Here's What You Need To Remember: China is bellicose, assertive, and hostile - but it is also very smart. The Communist Party, whatever its faults are, has an intelligent plan for China's domination in the twenty-first century, and U.S. strategic planners should take note.

For over a generation China has been on a long march to assert its dominance on the global stage. As a young foreign affairs officer in Asia and later working in U.S. military intelligence, I came to respect the Chinese’s commitment to achieving their goals. They work hard and make great sacrifices to get ahead, often by any means necessary—not the least of which is commandeering others’ ideas and engineering those to serve their ends.

When I served as Commanding General of the U.S. Army Intelligence Center and School, it became clear that China’s ambitions were becoming more brazen. In recent years, Beijing’s quest for international supremacy has taken an even more aggressive form: “wolf warrior diplomacy,” as senior Chinese officials have begun to call it. As China’s actions, both public and covert, demonstrate, the Communist Party, in its drive for dominance, is committed to disrupting the United States.

The Trump administration has taken bold action to ratchet up controls meant to protect U.S. technologies that are critical to American national security—moves the incoming Biden Administration can expand upon. Recently, the Commerce Department announced that companies will need a license to do work with China’s top semiconductor manufacturer, Semiconductor Manufacturing International Corporation (SMIC).

The Commerce Department’s notification to SMIC notes that exports to the company “may pose an unacceptable risk of diversion to a military end use in the People’s Republic of China.” In other words, the technology could be siphoned off to the Chinese government—a reminder that no Chinese company is truly independent of the country’s Communist Party’s control. These export restrictions are much needed, but should also be extended to other similarly adversarial companies like Yangtze Memory Technologies Company (YMTC), ChangXin Memory Technologies (CXMT), and others with similar characteristics.

The announcement follows a clampdown on the Chinese tech giant Huawei and 152 of its affiliates that were added to the Entity List since May 2019. Last month the Commerce Department’s Bureau of Industry and Security also issued a call for public input to help define “foundational technologies,” which include semiconductors. The advance notice of proposed rulemaking (ANPRM) specifically notes: “Many of these items, including semiconductor manufacturing equipment…can be tied to indigenous military innovation efforts in China,” among other countries.

Gordon Chang, a Distinguished Senior Fellow at the Gatestone Institute, minces no words to describe China’s global semiconductor power-grab: “China is not, as many people will tell you, just a competitor. It is an enemy. China is trying to overthrow the international system, and in that process, it is trying to make you subject to modern-day Chinese emperors.”

The Battle for Technology of the Future

Semiconductors are the bedrock of modern technologies, found in computers, smartphones, as well as sophisticated networks like defense systems. Like a genome, semiconductors can reveal sensitive information about the technologies that use them—which can then expose vulnerabilities and create a backdoor into the U.S. national security apparatus.

As BG John Adams (Retired, U.S. Army), a former military intelligence officer and a prominent voice in the discussion on America’s national security vulnerabilities, explains: “The military needs access to leading-edge semiconductors that our adversaries lack… Most concerning is the continued offshoring of semiconductors production, research and development and intellectual property to potential adversaries such as China… The Defense Department requires semiconductors that are produced per Military Specification—specialized and custom-produced devices specifically for secure computing functions—for which there is no commercial demand.”

China’s presence in the semiconductor market is growing. Beijing is investing heavily to offset intellectual property (IP) restrictions and expand semiconductor production. The notorious “Made in China 2025” plan pledges $120 billion specifically to bolster China’s semiconductor manufacturing industry with the goal of producing 70 percent of all chips needed for local consumption.

The Chinese’s foray into the semiconductor market is dangerous to U.S. interests. Just as it did with LEDs, solar panels and a host of other technologies, China and its government-backed companies seek to flood the market with cheap products predatorily priced to drive out competition. With control of semiconductor the market, China will be able to leverage the technologies that utilize semiconductors—of which there are many—for objectives that clearly risk American national security.

Once China’s semiconductor manufacturers controls capacity, we know they will actively use it for military and intelligence purposes. For example, SOSi—a private technology consultancy—recently released a report explaining how SMIC chips are used in China’s military defense research.

SMIC is not the only adversarial semiconductor manufacturer. Yangtze Memory Technologies Company (YMTC) and ChangXin Memory Technologies (CXMT) along with Fujian Jinhua, have been referred to as the “three major semiconductor industry national teams of the Made in China 2025 plan.” Like SMIC, all of these companies enjoy overwhelming government advantages and have designs on dramatically expanding their market share within just a few years.

In each of these cases, SMIC, YMTC, and CXMT punctuate the blurred line between China’s private sector and its military-industrial complex. As Gordon Change explains: “Tech transfers to the Chinese pose a threat to Americans because of Beijing's policy of ‘civil-military fusion.’ This policy means there is no such thing as civilian-only tech cooperation in that country. The technologies that Beijing manages to beg, borrow, and steal are directly pipelined to the People's Liberation Army.”

The United States can thwart China’s ambitions to gain the upper hand in the modern technology race by stopping these “tech transfers.” Now more than ever, both the old and new Administrations must lean in on export controls to isolate China’s obviously malign intentions.