U.S. Navy Aircraft Carriers Have an Expensive Problem: Their Toilets 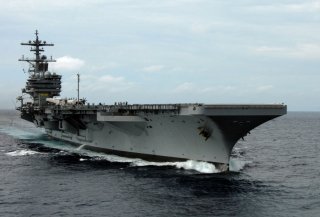 Here's What You Need to Remember: Unfortunately, this isn't the first time the toilet tissue on the ship has been in the media. In 2011 there were reports that at least twice in the carriers' first year in service all 423 toilets were out of service simultaneously.

The complaints regarding waste in the U.S. military took an interesting turn several months back when it was reported that the toilets on the U.S. Navy's USS George HW Bush (CVN 77), the newest Nimitz-class aircraft carrier, as well as the first-in-class USS Gerald R. Ford (CVN-78) are clogging frequently – and unclogging the systems can cost upwards of $400,000.

Sailors blamed the ship's vacuum system while the Navy blamed sailors for flushing hygiene products. At the time of those issues, sailors also complained of having to walk for an hour to find a working bathroom. The Navy spent 10,000 man-hours fixing the problem, and that apparently included the acid flush.

At the present time, the Navy has no plans to replace the toilet or sewage systems on the carriers – and the same system will reportedly be used on the still in construction USS John F. Kennedy (CVN-79), but it is unclear if the waste system will be deployed on the third and fourth Ford-class carriers – the future USS Enterprise and USS Doris Miller.