The U.S. Navy Has No Good Answer For China's 'Carrier-Killer' Missile Threat 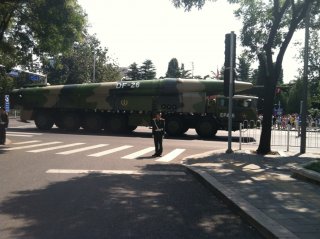 Here's What You Need To Remember: Beijing would view destroying America’s military installations here as crucial to preventing the United States from intervening in a conflict between China and one of its neighbors, most likely Taiwan. That said, China’s ability to attack places closer to the Chinese mainland is much greater compared to those that can threaten Guam.

This week Chinese state media reported that a new brigade of Beijing’s most advanced intermediate-range ballistic missile (IRBM) has been “activated.”

(Considering breaking news regarding China's recent two anti-ship missile tests, we re-present this article from back in 2018).

Zachary Keck (@ZacharyKeck) is a former managing editor of the National Interest. This article first appeared in 2018.