The U.S. Navy Must Evolve to Contain Chinese Power 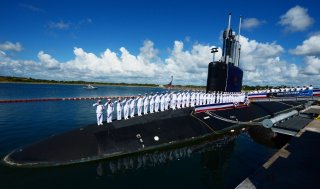 Here's What You Need to Remember: Sometimes an element of U.S. Navy culture may need to be modified or even destroyed, as Schein says. But demolition should never take place without ample forethought. It could carry grave consequences even if justified.

Sometimes it feels as though there’s an emptiness at the U.S. Navy’s cultural core. An institution’s culture derives from its heritage. The present generation looks to great and not-so-great figures from the past to help it react when change buffets the institution—as it will sooner or later. Yet navy leaders tamper incessantly with the mystic chords of memory that bind the sea service to its history. They should resist the urge to meddle unless the need is clear and pressing. If it is not necessary to change a tradition, it is necessary not to change it.

Exhibit A: uniforms. Monkeying around with the sailor’s seabag seems innocuous. Oftentimes it’s good for a belly laugh. For instance, sea-service leaders have long displayed a weird fascination with camouflage. Their obsession seems to be an artifact of the post-9/11 years when land combat was where the action was for the U.S. armed forces. Camouflage uniforms are invaluable for groundpounders who need to blend into the landscape. They do little if any good on board ship. Not, that is, unless uniforms come in haze gray to match the color slathered on navy hulls. Such garb could help crewmembers elude small-arms fire from, say, the Iranian Revolutionary Guard Corps, which relishes making close passes at U.S. Navy vessels transiting the Strait of Hormuz.

But no. Instead sailors were instructed to wear “aquaflage,” or “blueberries”—blue-on-blue camouflage, in other words—as their working uniform for about a decade. Aquaflage worked smashingly . . . if the point was to keep the crew from finding a shipmate who had fallen overboard. It blended right into the sea, disguising his or her whereabouts from would-be rescuers. After a generous helping of mockery, thankfully, the service leadership replaced aquaflage. But it did so with a type of forest camouflage. Seldom do trees grow aboard ship. End the madness, as one naval officer wrote this week. The U.S. Navy is not a land army. The sea service needs to get back to some variant of traditional naval uniforms—and reconnect with its nautical past in a visible, tangible way.

Not just silly change but frequent change—even in a good cause—disrupts cultural continuity. Aristotle, the classical Greek world’s “first teacher,” warns against constantly adjusting a state’s “regime,” or way of life. Incremental change can transform the regime, which encompasses everything from governing arrangements to culture and mores. Change could be for the better; it could be for the worse. Military services are societies as surely as Greek city-states were. U.S. Navy magnates should abide by Aristotelian wisdom, making a kind of strategic Hippocratic Oath their credo: do no harm. In other words, service leaders must foresee and forsake changes, major and minor, that do the navy’s culture harm over time. Needless tinkering with uniforms corrodes sailors’ bond with the past and violates the Hippocratic Oath of institutional leadership.

Exhibit B: ship names. For a long time the U.S. Navy had a more or less set naming scheme for different ship types. Battleships were named for states (USS Missouri), cruisers for cities (USS Houston), aircraft carriers for famous battles (USS Lexington) or naval dignitaries (USS Franklin Delano Roosevelt), and submarines for fish (USS Archerfish). Was the logic behind this naming scheme somehow sacrosanct? No. But it did carry the force of tradition, a good in its own right.

The system broke down in part because of deliberate advocacy. For example, Admiral Hyman Rickover, to this day a legendary figure for U.S. Navy submariners, arranged for the last class of nuclear-powered attack submarines commissioned during the Cold War to be named for cities (USS Los Angeles). To justify departing from tradition he explained that “fish don’t vote.” The silent service needed political support. Rickover regarded the Los Angeles class as a mode of outreach to urban areas across the country as well as a force of shipkillers.

The historic naming scheme also decayed because of advances in naval technology. Battleships are no more, while nuclear-powered ballistic-missile submarines (SSBNs) came on the scene starting in the late 1950s and needed names of their own. Transposing the practice of assigning states’ names to capital ships probably seemed natural. Battleships were capital ships of yesteryear, while SSBNs packed doomsday firepower and represented a logical successor.

In recent months and years the U.S. Navy has undertaken a partial cultural restoration in this area. State names remain in place for SSBNs. For instance, the coming years will see a new USS Wisconsin take to the depths as part of the Columbia-class SSBN fleet now in the making. Over the past few decades the navy drifted toward naming nuclear-powered aircraft carriers solely after politicians. (Admiral Chester Nimitz, the namesake of the Nimitz class, is an honorable exception. But Nimitz entered service in the 1970s and will retire before long.) That habit persisted with the fledgling Gerald Ford class. To their credit, though, service chieftains recently resumed using flattops to pay tribute to heroes of immortal fame. The Ford-class carrier after next will be USS Doris Miller—honoring Doris “Dorie” Miller, an enlisted sailor who distinguished himself in action on board the battleship West Virginia at Pearl Harbor during the Japanese assault. A new class of frigates will bear the venerable name Constellation, while a future Virginia-class attack boat will be dubbed USS Barb, for submarine stalwart Eugene Fluckey’s World War II boat. Sea creatures may be making a comeback. Let the cultural renaissance proceed.

Admiral Jim Stavridis proffers a mystic-sounding explanation for why this all matters. He opens his book Sea Power by observing that “the sea is one.” It is a unified body of water not just in geographic space but in time. The world ocean sprawls “horizontally” across the globe, that is, but it also undulates “vertically” back in time. In other words, seafarers join something larger and older when they go down to the sea in ships. A sailor walking the weather decks, attests Stavridis, beholds “the same view, the same endless ocean that Alexander the Great saw as he sailed the eastern Mediterranean . . . and that Halsey saw as he lashed his Fast Carrier Task Force into combat in the western Pacific.”

Sailors share a bond with bygone generations of seafarers—and that bond helps sustain sea services through times of turmoil. A mariner, Stavridis maintains, is “at once an ocean away from the world of the land, but also connected to a long, unbroken chain of men and women who have set their course for the open ocean.” Seafaring folk take rank in an oceanic fellowship spanning centuries.

That’s a fellowship worth nourishing not just because of nostalgia but on practical grounds. Seemingly minor decisions, it seems, can have major cumulative impact on the U.S. Navy. Historian Henry Steele Commager explains that any society needs a “usable past” to find and shape its identity and command the allegiance of its members. Commager shows how early Americans fashioned a usable past to unite a clutch of states clustered along the Atlantic seacoast into a cohesive nation. Culture, he says, derives from history and tradition with a measure of mythmaking tossed in. It acts as ballast, helping a society ride out change to its ambient surroundings.

Founding-era Americans crafted a heroic past, deliberately stimulating nationalism to weld the new republic together. And they did so in a hurry. “Nothing,” writes Commager, “is more impressive than the speed and the lavishness with which Americans provided themselves with a usable past,” manifest in history, legends, and heroes, not to mention cultural artifacts such as paintings and patriotic ballads. America’s newfound history and traditions left an indelible stamp on the nation’s identity, or basic character.

So it is with nations, so it is with subordinate groupings such as martial services. Tending to an institution’s character is a crucial function of leadership. Indeed, veteran MIT business professor Edgar Schein proclaims that one of the “most decisive functions of leadership is the creation, the management, and sometimes even the destruction of culture.” Quite so. Sometimes an element of U.S. Navy culture may need to be modified or even destroyed, as Schein says. But demolition should never take place without ample forethought. It could carry grave consequences even if justified.

The key points are these. One, navy leaders must think of themselves as cultural stewards, not just administrators, strategists, or operators. And two, they must recognize that their decisions could subvert the institution’s culture either wittingly or unwittingly. To reduce that possibility they should retune their biases. They should look upon actions that further estrange the U.S. Navy from its own historical base with acute skepticism. By contrast, what refreshes the past is worth undertaking unless it presents clear and present dangers to the navy’s fighting prowess.