The U.S. Navy Is Planning to Win With Distributed Maritime Warfare 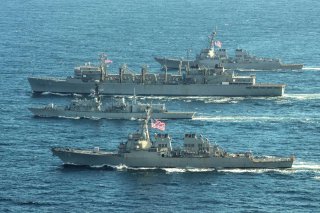 Here’s What You Need to Remember: For nearly ten years now, the Navy has been vigorous with efforts to solidify a transition away from more than a decade of counterinsurgency, anti-piracy and counterterrorism operations.

Distributed Maritime Operations, in part due to its emphasis upon networking and disaggregated warfare formations, is naturally intended to expand into a multi-domain operations paradigm. For example, the Carrier Strike Group Live Fire Exercise in the Indian Ocean can complement ongoing B-1 bomber missions in India. Together these operations create a circumstance wherein maritime offensive maneuvers could be preceded or followed up with specifically tailored B-1 bombing missions against China during a theoretical future war. For example, B-1s could help soften the battlefield for carrier-launched F/A-18s conducting high-speed hit and run attacks from the sea.