The U.S. Navy is Researching New Missions for Carrier-Launched Drones 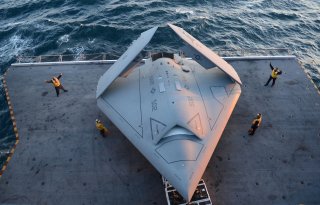 Here's What You Need to Remember: The current drone-centered mission scope is largely surveillance and refueling, as evidenced by a first-of-its-kind MQ-25 Stingray carrier-launched refueler drone now being developed for Navy carriers.

The Navy is building a special new command and control mini "drone-headquarters" space on its aircraft carriers to operate deck-launched drones as part of a strategy aimed at massively increasing the scope of carrier-launched drone missions in coming years.

Launching drones from carriers represents an unprecedented technical leap for the Navy as it seeks to expand surveillance and combat range and mission scope for its Carrier Air Wings. The new space, as explained Jan.16 at the Surface Navy Association Annual Symposium by senior Navy leaders, is being engineered as an adaptation to existing ship-based structures and configurations. The center, called Unmanned Aviation Warfare Center, is being built into both the Navy's new Ford-class carriers as well as its existing Nimitz-class carriers.

“It is the re-purposing of a space on the ship to basically be a control room from which you can send and receive data from unmanned systems and give them updates as needed,” Capt. Charles Ehnes, In-Service Aircraft Carrier Program Manager.

As mentioned by Ehnes, this can massively increase target designation and combat-essential data sharing across air and surface Navy assets at war. Drones can not only increase range but also, of course, reduce risks to manned pilots, and such technology is rapidly improving as weapons developers continue to accelerate new methods of manned-unmanned networking and information sharing in real-time.

The Navy’s move to progressively increase the number of carrier-launched drone missions brings several new attack and combat options for ship commanders. The current drone-centered mission scope is largely surveillance and refueling, as evidenced by a first-of-its-kind MQ-25 Stingray carrier-launched refueler drone now being developed for Navy carriers. The emerging MQ-25 drone, to reach operational status in the next few years, will greatly extend the attack reach of carrier-launched fighters such as F-35s and F-18s. In effect, a drone of this kind could almost double the reach of Carrier Air Wing attack assets, enabling greater standoff range for carriers and longer “dwell time” on attack missions over enemy territory. For instance, if an emerging F-35C operates at an attack range of 300 to 500 miles before needing to refuel, a carrier-launched aerial refueler could potentially double this and greatly extend mission options.

In recent years, the Navy has been moving quickly to develop and refine new technical paradigms designed to address the many challenges associated with launching and landing drones on carriers -- without the direction of a manned pilot. These included finding ways a drone can withstand rigorous weather conditions such as windy landings, navigate various sea-states, land on large moving ships, land at night, and coordinate with other air assets.

Alongside the fast-emerging carrier-launched drone refueling mission, it is conceivable that future carrier-launched drones could operate attack missions -- all while using the carrier-based drone command center to ensure a human is in the loop performing command and control. An armed drone could launch from a carrier, find and identify targets before networking them to manned airborne fighter jets or carrier-based Navy decision-makers.