The U.S. Navy's Arleigh Burke-Class Destroyers are Old, But Capable 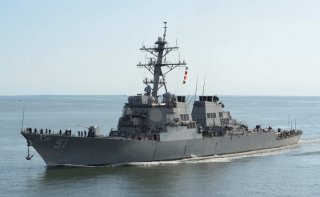 Here's What You Need to Remember: The Navy has squeezed out all the performance they can from the Arleigh Burke-class. Let’s hope that the LSC can be put into service before America’s Arleigh Burkes have to go to war.

The Arleigh Burke-class of destroyers are old. Though there are several variants of the venerable ship, the Navy drew up the original blueprints in the mid-1980s and the first hulls were commissioned later that decade. Still, they’re pretty capable.

The design incorporated lessons learned from the Royal Navy’s brief foray into Latin American during the 1982 Falklands War. Shipbuilding began to favor aluminum superstructures on top of steel hulls as a weight-saving measure, but the British experience revealed that aluminum was significantly less resistant to fire and other battle-related damage than an all-steel design. The Arleigh Burke-class opted for an all-steel hull and superstructure.

It was also one of the first ship designs in the Navy to incorporate some degree of stealth into its design. The mainmast, which houses the ship’s bridge and communications equipment, was angled slightly upwards to better deflect enemy radar and consequently makes the ship less visible.

The Arleigh Burke-class was slated for replacement by the troublesome Zumwalt-class guided missile destroyers this year, though that did not happen. The Zumwalts suffered from extreme cost overruns—astoundingly, an individual Zumwalt ship costs more than a nuclear-powered Virginia-class submarine. Rather than the Navy buying a planned thirty-two Zumwalt hulls, a mere three were ultimately laid down and put into service.

With the Zumwalts out of the picture, the Navy’s Arleigh Burkes are supposed to be replaced by the still-under development Large Surface Combatant ship. The LSC program was intended to replace the Arleigh Burke-class destroyers by 2023, though that date has now been pushed back to 2026 or later.

“We’re even considering right now, as we have these conceptual discussions on the Large Surface Combatant, do we need something beyond even a Flight III [the latest Arleigh Burke-class variant] on the 51s? And again, I tell people, the budget always gets a vote, so you’ve got to think about what the Navy is doing over the next five to ten years in terms of ship construction: we’ve got frigates coming online, Columbia [ballistic missile submarines] hands down is the top priority, we’re recapitalizing the sealift fleet, we need to continue building Virginias [attack submarines], we just executed a two-carrier buy.” For now, it seems, Arleigh Burkes will just have to keep on keeping on.

By 2034, the Navy plans on being a 355 ship fleet. In order to get to that mark, they’ll have to put ships into the water, ready or not—and the Arleigh Burke-class will have to get them there. Still, the class has already been improved almost to the maximum. The design’s internal space limitations don’t allow for improved power generation onboard, and newer communications, radar, and propulsion systems can’t be installed, as they require more juice. The Navy’s directed energy weapons, still in development, likely won’t be able to be installed on the class either.

The Navy has squeezed out all the performance they can from the Arleigh Burke-class. Let’s hope that the LSC can be put into service before America’s Arleigh Burkes have to go to war.

Caleb Larson is a defense writer for the National Interest. He holds a Master of Public Policy and covers U.S. and Russian security, European defense issues, and German politics and culture. This first appeared earlier this year and is being republished due to reader interest.