The U.S. Navy's Zumwalt 'Stealth' Destroyer Is a Real Threat 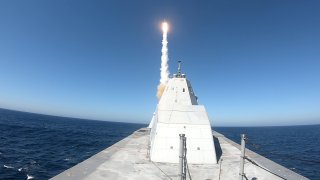 Here's What You Need to Remember: A Zumwalt will almost certainly help protect a carrier strike group. Drawing upon its stealthy configuration, a Zumwalt destroyer might be well positioned to test or penetrate blue-water enemy defenses without necessarily surrendering the location of a carrier group.