Is The U.S. Space Force Preparing For War? 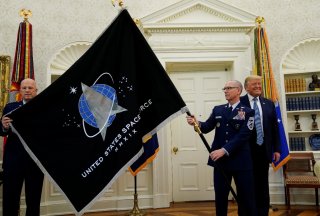 If I were a Russian or Chinese space warfare theorist, thinking about a future war with the United States, it might be reasonable to bet that the newly-minted U.S. Space Force was planning for a kinetic space conflict, starting on Day 1.

Understandably, the Space Force keeps a tight lid on broader discussions of its capabilities. There isn’t a lot of direct information one way or another. Without a clear understanding of what the U.S. can do, an analyst might start trying to figure out U.S. intentions.

The culture of the Space Force might still be unformed and changing; it does bear at least a family resemblance to its sister services in at least one significant respect. In the services, the purveyors of kinetic mayhem — the shooters and the killers — tend to be culturally dominant within their respective services. The Space Force has been no exception to this.

Whether or not the Space Force shooters want to or not, they present a louder, more muscular, aggressive face of the Space Force. Conversely, non-kinetic approaches to space dominance get little discussion indeed.

Between the relative boldness of the kinetic space warfare community and the comparative silence of the non-kinetic warfare practitioners, the overall message suggests a Space Force with a strong bias towards kinetic warfare.

Compounding this problem, the USSF does not speak a lot about the activities of its potential foes. In public discussion, there's little to suggest that U.S. opponents are hostile and aggressive and that need a muscular response. Keeping malicious actions secret makes the cultural bias towards kinetic action appear spontaneous — that it is not a response to unfortunate real-life conditions, but more of an itchy trigger finger.

As space conflict planners know, kinetic action in space comes with an immense risk associated with orbital debris. An anti-satellite weapon, like the Chinese weapon demonstrated in 2007, can generate huge amounts of debris. The Chinese test itself created more than 3,000 bits of space shrapnel. Keep in mind that orbital speeds are immense, so an impact by even a small bit of debris can have a devastating effect producing vast clouds of junk. Those bits of debris themselves become unguided, uncontrolled, kinetic anti-satellite weapons of their own. Should the debris get thick enough, collisions can create a sort of feedback effect, called the Kessler Syndrome, where each bit of space shrapnel hits and annihilates additional satellites, creating more debris and so on.

Thus, at the very far end of kinetic space conflicts, we may see some echoes of strategic deterrent thinking about nuclear warfare in decades past. An orbital debris chain-reaction starts to take on at least a passing resemblance to the more familiar idea of Mutually Assured Destruction. Without getting into the entire history of the nuclear deterrent, the fundamental problems should be familiar to people thinking about space conflict everywhere: Difficulties with escalation control, issues with massive retaliation as a doctrine, deterrent credibility, and so on.

At a strategic level, the USSF would probably benefit from steering conversation in a slightly different direction. First, by clarifying the kind of environment we are operating in, one in which a kinetic response is a legitimate response, not just an itchy trigger finger. Second, the U.S. has a variety of tools at its disposal, enabling the U.S. to control and manage escalation of a space conflict. Explain that the U.S. can do all kinds of things to zap a satellite without going the full Skywalker and blowing it to smithereens.

These suggestions are really just a small part of learning to think about space operations in the extensive political-social-media context that is and will continue to be the backdrop to combat operations for the foreseeable future. Maintaining a very tight lid on what the reality of space conflict today may be a matter of winning the security battle versus losing the messaging war tomorrow.

Ryan Faith is a space policy consultant who previously served as a professional staff member supporting the House Subcommittee on Space and Aeronautics. Prior to that, Faith was VICE Media’s Defense and Security editor and a research analyst for the Space Foundation.