The U.S. is Unprepared for the "Scramble for the Arctic" 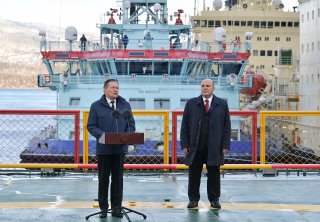 A brand-new crimson-hulled Chinese icebreaker recently concluded an expedition through the Arctic, crunching ice up to five feet thick. The ominously named Xue Long 2 (or Snow Dragon) is a recent newcomer in an increasingly crowded Arctic. Competition is heating up as fast as the ice is melting. Countries north and south of the Arctic circle believe themselves to be in a 21st century "Scramble for Africa," their sights set on natural gas, oil, and minerals to exploit.

While some decry an "icebreaker gap" (the U.S. only has one, and it will take years before more come online), the real problem is that U.S. policy in the Arctic lacks direction. The United States needs a better approach – a new cooperative arrangement with Russia to protect the environment, maintain peace in the region, and box-out China.
Unfortunately, current U.S. Arctic policy shamefully denies the reality of climate change and its impact on the Arctic. In 2019, Secretary of State Mike Pompeo scuttled a multi-nation declaration by the Arctic Council highlighting climate change. The Pentagon’s Arctic strategy is no better, describing the region as a place to compete with Russia. By focusing narrowly on climate denial and competition, current U.S. policy hampers international climate cooperation, overestimates geopolitical risks, and hurts regional efforts that could pro-mote other U.S. objectives, such as boxing-out China.

The United States needs a new framework of cooperation with Russia in the Arctic. The challenges ahead are too great to go it alone. The United States should accept that it is normal for Russia to develop a robust defensive military apparatus within its own territory. Both sides should agree to halt provocative military maneuvers. Russian policy calls for [1] the Arctic to be "bracketed" from issues in Europe. American strategy should match this policy and encourage the use of the Arctic Council as a forum for dialogue. American and Russian relations should focus on climate change and sovereignty. Expansionist China should be kept at bay.
The Arctic should not become a new hotbed of great power rivalry. Such competition distracts from climate cooperation at this most crucial time in history. Russia has indeed rebuilt its Arctic military presence, commissioning nuclear-powered icebreakers and military bases. But the Arctic is more important to Moscow than to the United States, with 53 percent of the Arctic's coastline in Russian territory. Not surprisingly, Russia deploys more re-sources in the Arctic than does the U.S. There is no "icebreaker gap" as many claim [2]. The U.S. Navy should not focus on surface warfare planning. The U.S. and Russia have historically cooperated in the Arctic despite fierce competition elsewhere and should do so again.

China has colonial ambitions in the Arctic [3]. It has described itself as a “near-Arctic nation” and seeks to establish a presence to displace western powers. Inter-Arctic cooperation can effectively box-out Beijing; buying Greenland is not necessary. Russia is happy to limit its Arctic relationship with China to commercial development. The Arctic Council is the forum where Chinese expansion can be halted. A 2018 ban on unregulated fishing on the Arctic’s high seas supported by Russia was aimed at stopping Chinese fishing fleets from ravaging yet another ocean. Council members should block Chinese efforts to buy mines and vital infrastructure in northern Canada and Greenland.

It will not be easy to cooperate with Russia. Many will question Moscow's sincerity. But America's Arctic allies like Norway [4] cannot exist in a state of permanent tension with Russia. Critics will also complain that this framework does not solve freedom of navigation issues, as Russia and Canada will continue to claim jurisdiction over Arctic trade routes. The U.S. should contest these claims but through arbitration. Appeals to escalation [5] should go unheeded. Let Moscow come to its own conclusions about its uneconomical policies.

The Arctic is in peril. The ground is literally exploding as the permafrost heats up [6]. The United States and Russia must "bracket" their rivalry when dealing with Arctic issues. Much of the Arctic is clearly within Russian territory. Recognizing this is the only way to keep the climate crisis a priority and effectively box-out expansionist China. It is time for Russia and America to break the ice and bring to the table global climate leadership.

Henri-Nicolas Grossman is pursuing a Master of Arts in Security Policy Studies at the George Washington University Elliott School of International Affairs. He graduated from King’s College London in 2019 with a B.A. in War Studies & History.