The USS Bonhomme Richard’s Decommissioning: The Good, the Bad and the Ugly 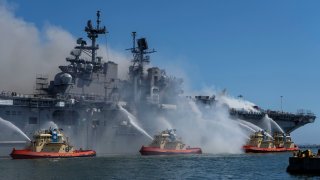 The Navy’s Nov. 30 announcement to decommission the USS Bonhomme Richard following July’s catastrophic fire illustrates the frailty of our naval defense industrial base. If the U.S. is serious about securing its interests and leading the competition with China and Russia, it must invest more in this sector critical for building and sustaining the Navy.

While the loss of this ship is significant on its own, it provides several important insights as the Navy seeks to compete in the maritime domain. It was hoped that the ship could yet be useful to the fleet for a while, perhaps for future fleet experimentation, but sadly this is not possible. That said, the implications are not all bad:

The heroic damage control efforts by the crew, firefighters, and nearby naval personnel were emblematic of the Navy's mantra: Don't Give Up the Ship! Their efforts fighting fierce fires over four long days reflects favorably on the training and tenacity with which our sailors would fight at-sea. These men and women fought back a raging fire, securing the ship's watertight integrity, which made moving the ship for eventual decommissioning and scrapping easier and less costly.

The Navy weighed several options regarding the ship's future: One, restore it to original condition costing around $3 billion and taking five to seven years to complete. Two, repurpose the ship for a new mission (e.g., hospital ship), which would cost over $1 billion, taking five to seven years to accomplish. Lastly (the option chosen), decommission the ship at $30 million, taking nine to 12 months to complete.

The loss of the Bonhomme Richard highlights the cruel reality that the Navy must continue operating with fewer ships for the foreseeable future than it needs to counter America's adversaries. According to its own current annual long-range shipbuilding plan, the Navy's fleet of 296 is already short five ships.

The Navy’s ultimate decision exposes an ugly reality of the fleet today, revealed in comments by Admiral Michael Gilday, the Chief of Naval Operations, at a Dec. 2 Senate Armed Service Committee hearing. According to him, repairing or repurposing the ship would have been expensive but, more importantly, strain the naval industrial base and negatively impact overall fleet shipbuilding and maintenance.

This should come as no surprise. An inadequate naval industrial base has been straining to keep up with the Navy’s maintenance needs (as reported by the Government Accountability Office) over the past few years. The decision to decommission the USS Bonhomme Richard is emblematic of a longstanding deficit of investing in critical naval infrastructure, maintenance capacities, and shipbuilding.

This is sadly unsurprising given past experience: idling of nuclear submarine USS Boise for 960 days awaiting maintenance, two years to repair each the USS Fitzgerald and USS McCain following separate collisions.

As the Navy enlarges its fleet, so too must it accelerate the expansion in capacity and recapitalization of shipyard infrastructure at both public and private shipyards. The Navy's 20-year Shipyard Infrastructure Optimization Program to recapitalize its four public naval shipyards will be inadequate in its second year. As argued by my colleague, Maiya Clark, additional capacity is needed to meet the needs of today's fleet, let alone for one growing to meet the China and Russia naval challenge.

A strong American maritime force – the Navy, the Coast Guard, the Merchant Marine – is critical to the nation's defense. Yet, they have not seen commensurate investment and growth to meet such rising threats.

Efforts to reverse this decades-long trend have not gained traction. More energetic and creative initiatives are called to bolster an industrial sector critical to its security.

Brent D. Sadler is Senior Research Fellow for Naval Warfare and Advanced Technology in the Center for National Defense, of the Kathryn and Shelby Cullom Davis Institute for National Security and Foreign Policy, at The Heritage Foundation.