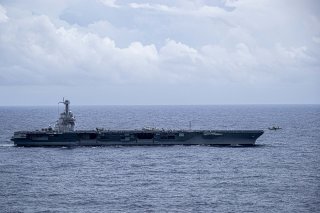 The USS Gerald R. Ford has taken another large step toward being ready for war now that its Advanced Weapons Elevators (AWEs) are now complete, a Navy announcement said.

The elevators have undergone considerable scrutiny in recent years. The new technology faced several issues, and resolving those problems is a significant step for the lead ship of the Ford-class carriers.

The new elevators are fundamental to a group of new technologies specifically developed for and woven into the Ford-class ships. The elevators are expected to increase the Ford’s sortie rate and ability to quickly carry out attacks. Aircraft such as F-35Cs or F/A-18s will be able to refuel and reload on a much faster timetable, increasing the speed, scope, and intensity of any air attack campaign. Ordnance can be quickly brought up and loaded onto an aircraft for take-off.

The Ford-class has several new designs intended to increase its combat ability in a peer conflict. For example, the deck of the Ford is larger than the Nimitz-class for the specific purpose of enabling an improved sortie rate. The sortie rate of the Ford class is improved as much as 33 percent, according to Navy developers.

The weapons elevators are also intended to work in tandem with a new electromagnetic catapult system called EMALS. EMALS represents a breakthrough in aircraft carrier launch technology; aircraft had previously been launched via a steam catapult. EMALS allows for a smoother, more continuous take off by using an electromagnetic field to propel the aircraft off the deck. This is expected to create less wear and tear on the aircraft themselves, allowing for a longer service life.

These and other new technologies will allow the USS Ford to launch more aircraft on missions, respond to new targets, and sustain a higher tempo of attacks.