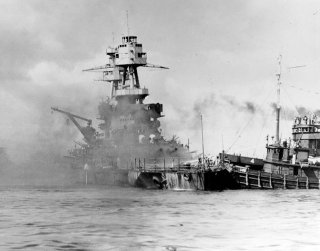 Here's What You Need to Remember: USS Nevada became the only battleship to have been at both Pearl Harbor during the attack and to take part in the June 6, 1944 landings on Normandy. The battleship then took part in operations in the South of France in August and September of that year, before returning to the Pacific, where she assisted with the invasions of Iwo Jima and Okinawa.

Just under a year ago, a deep-sea exploration found the wreck of an American battleship in 15,400 feet of water, more than three miles beneath the Pacific Ocean.

She had been previously sunk on December 7, 1941, during the attack on Pearl Harbor, returned to duty to take part in the Normandy invasion on D-Day, and later conducted bombardments against the Japanese-controlled islands of Iwo Jima and Okinawa. After the war, this once-majestic warship was painted orange and used as a test ship at the Bikini Atoll atomic bomb detonations in 1946.

Few warships in American history have such a colorful career as USS Nevada (BB-36), the first of a class of two 27,500-ton battleships. Commissioned in March 1916, she operated in the waters of the Western Atlantic and the Caribbean until mid-1918 when she headed to the British Isles for service at the end of the First World War.

Modernized from 1927 to 1930, Nevada was fitted with a new superstructure, her five-inch secondary battery was relocated and new anti-aircraft guns installed. She was more powerful and better protected than ever when she was returned to duty with the U.S. Battle Fleet, operating mainly in the Pacific.

Only the second United States Navy vessel to be named for the 36th state, she was considered a leap forward in dreadnought technology, featuring triple gun turrets, using oil in place of coal for fuel and featuring the "all or nothing" armor principle. The Nevada-class was seen as the first U.S. Navy's "standard-type" of battleships.

Along with the rest of the U.S. Navy's Pacific Fleet battleships – which were all in port for the weekend for the first time since July 4, 1941 – USS Nevada came under attack on December 7, 1941. While she was the eldest, even if just by a few months, of the battleships in port that day, she was also the only battleship to get underway.

Vigorous salvage work along with temporary repairs enabled the aging battle wagon to steam back to the West Coast in the spring of 1941. At the Puget Sound Navy Yard, she received repairs and improvements including greatly enhanced anti-aircraft batteries. She returned to combat in May 1943 and took part in the Attu landings to liberate the occupied Alaskan islands, and then was transferred to the Atlantic, where she served as a convoy escort.

USS Nevada became the only battleship to have been at both Pearl Harbor during the attack and to take part in the June 6, 1944 landings on Normandy. She was praised for "incredibly accurate" fire support, hitting targets just 600 yards from the front lines. The battleship then took part in operations in the South of France in August and September of that year, before returning to the Pacific, where she assisted with the invasions of Iwo Jima and Okinawa.

Neither Nazi Germany nor the Japanese was able to sink her – a Japanese kamikaze did hit her as well as a Japanese artillery shell – and after the war the U.S. tried something even bigger.

Too old for the post-war fleet, she was assigned to serve as a target in the July 1946 atomic bomb tests at Bikini in the Marshal Islands. She survived a pair of tests, and it was finally on July 31, 1948, that the radioactive warship was used in a four-day naval gunfire exercise.

The ship that was too tough to die was finally sunk sixty-five miles southwest of Pearl Harbor.

Last year, the wreck of Nevada was found by a mission conducted by SEARCH and Ocean Infinity. They found a debris field stretched some 2,000 feet from the hull.

"Rising from its watery grave after being sunk at Pearl Harbor, it survived torpedoes, bombs, shells, and two atomic blasts," added Delgado. "The physical reality of the ship, resting in the darkness of the great museum of the sea, reminds us not only of past events but of those who took up the challenge of defending the United States in two global wars. This is why we do ocean exploration – to seek out those powerful connections to the past."