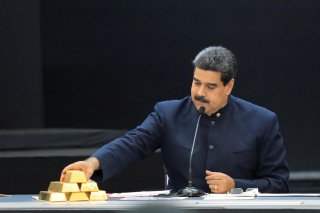 Through its central bank, the regime of dictator Nicolás Maduro in Venezuela is seeking to repatriate $1bn worth of gold stored at the Bank of England. On May 14, its legal representatives in the UK filed a legal claim with a London court in order to release the funds, supposedly into the hands of the United Nations Development Programme (UNDP). Although the reasoning for the regime’s move has shifted over time, confronting the coronavirus pandemic with Venezuela’s decrepit health infrastructure provides the latest excuse.

Setting aside legal technicalities, there are strong reasons for the UK government not to allow such a transaction to transpire. For one, the UK does not recognize Maduro’s regime — together with the United States and the European Union, the British see Interim President Juan Guaidó as the legitimate leader of the country. As long as Venezuela’s central bank remains under the Maduro regime’s control, British authorities have little reason to take its legal action seriously.

The pandemic is having a catastrophic impact on the country. However, given that the Maduro regime first lobbied the British to gain control of the gold in 2018, it is hard to take its promise that the funds would be used solely for the fight against COVID-19 at face value. Channeling the funds through UNDP is not in itself a reassurance — direct delivery of healthcare services falls well outside of the organization’s mission.

Past experiences with the Maduro regime suggest a high level of caution in providing any form of material assistance that could be monetized and subsequently pilfered and distributed among regime cronies. While ordinary Venezuelans should not be made to pay for the crimes of the regime, especially during a pandemic, it is equally important to ensure that aid does not flow on the regime’s own terms and without tight international scrutiny. On many occasions, the regime has used critical supplies and food as a tool of social control to shore up political support.

Another potential concern is the recent volume of nefarious dealings between Venezuela and Iran, both of which are heavily sanctioned countries where the illicit gold trade forms the basis of this growing nexus. Desperate for oil (despite the largest proven reserves in the world), Maduro is raiding Venezuela’s gold vaults and trading the commodity for equipment and chemicals to increase oil production at the country’s refineries. In late April, some nine tons of gold — worth around $500 million — departed Venezuela on Mahan Air, a sanctioned Iranian airline. Meanwhile, Venezuela is left with only $6 billion in hard currency reserves — its lowest amount in three decades. The risk of any repatriated gold being diverted in the name of the Maduro regime’s stability is high.

Of course, London has provided a safe haven to the world’s kleptocrats, especially from the post-Soviet space and Arab countries. As it leaves the European Union, the temptation to continue to play that role is strong, particularly as parts of the city’s financial industry are forced to relocate due to the loss of access to European markets. However, becoming a truly “Global Britain” — one that is active in the defense of democratic governance and freedom around the world — means embracing high standards of financial transparency and dealing with “dirty money” in a principled way. Rejecting the request from Maduro’s regime would send a strong signal that the UK takes the challenge of global kleptocracy seriously.

This article by Dalibor Rohac and Ryan C. Berg first appeared in AEIdeas on May 27, 2020.