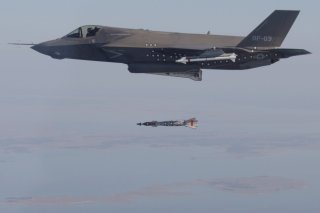 Here's What You Need To Remember: This heaping of weapons is housed in a combination of external and internal storage bays, which also appears to be the case in this recently leaked test. A Dutch F-35 flying in beast mode was sighted last year, armed with four GBU-31’s and two AIM-9X sidewinders in its external bay. F-35’s sporting the full, sixteen-missile air-to-air suite have yet to be spotted.