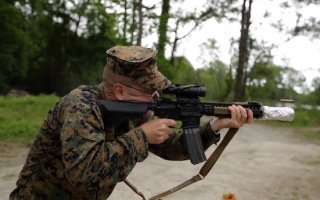 Key Point: “This is about as 'America' as you can get.”

Have you ever wondered exactly how hot a suppressor can get when you’re pumping out rounds in rapid succession with your service weapon? Marine Corps Chief Warrant Officer 5 Christian P. Wade did.

Wade, the 2nd Marine Division gunner, decided to perform a little rapid-fire experiment — with bacon, naturally — for the second installment in his “Gunner Fact or Fiction” video series, which aims to bust “common myths and misconceptions regarding the true physical aspects of Marine Corps weapon systems.”

“We’re going to cook some bacon, just to show you how hot this [suppressor] can get… and I’m hungry,” Wade says in the video. “This is about as America as you can get.”

Wade wraps a few bacon strips around the suppressor of an AR-15 variant. “Just to be clear, don’t do this with your U.S. Marine Corps-issue rifle,” he starts. “I don’t recommend it. You might get in trouble.”

Once his muzzle is bacon-wrapped, Wade covers the whole works in aluminum foil, then makes it rain lead downrange to see if the heat from firing is enough to cook thin strips of meat.

After just a few shots, you can see the smoke coming off the foil. And, it turns out, it works — maybe a little too well. After a few minutes, the bacon is crisped black.