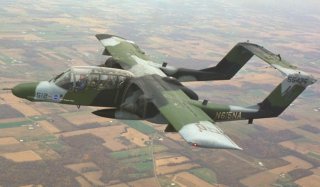 Here's What You Need to Remember: The Bronco’s missions included observation, forward air control, helicopter escort, armed reconnaissance, gunfire support, utility and limited ground attack. The Air Force primarily employed the OV-10A in a FAC role. The first of those arrived in Vietnam in July 1968, and in total 157 OV-10As were delivered to the United States Air Force before production ended in 1969.

The 1960s saw the development of some very unique and very specialized military aircraft. Among those was the North American Rockwell OV-10 Bronco, a twin-turboprop light attack and observation aircraft. Developed in the early 1960s for use as a counter-insurgency (COIN) combat, the OV-10A’s primary role was a forward air control (FAC) plane during the Vietnam War.

Interestingly, it was actually first conceived by the United States Marine Corps, which saw a need for a rugged, simple, close air support aircraft that could provide support in forward ground operations. One consideration was an aircraft that could use roads as runways. While the U.S. Army was focused on helicopters, the project was then joint developed by the USMC, U.S. Air Force and U.S. Navy as a tri-service program and the first production aircraft arrived in 1966. It first flight took place in August 1967.

Designed and built by North American Aviation in Columbus, Ohio, the Bronco proved to be faster and more tactically versatile than the Army’s helicopters of the era, yet was slower and far more maneuverable than jets. It could utilize tactics simply not possible with either. Adding to the OV-10A’s versatility was its rear fuselage compartment, which had a capacity of 3,200 pounds of cargo—and it could carry five combat-equipped troops, or two litter patients and a medical attendant.

The aircraft was powered by two Garrett-AiResearch T76 turboprops of 715 shaft hp each, and that provided a maximum speed of 281 mph and a cruising speed of 223 mph. It had a range of 1,240 miles and a ceiling of 26,000 feet. It was armed with four M-60C 7.62mm machine guns in the fuselage, and it was five fuselage and two underwing hardpoints that had the provisions to carry a combination of seven to nineteen-tube rocket launchers, AIM-9 Sidewinder missiles or up to 500 pound pounds.

The Bronco’s missions included observation, forward air control, helicopter escort, armed reconnaissance, gunfire support, utility and limited ground attack. The Air Force primarily employed the OV-10A in a FAC role. The first of those arrived in Vietnam in July 1968, and in total 157 OV-10As were delivered to the United States Air Force before production ended in 1969.

The U.S. Navy’s Light Attack Squadron Four (VAL-4) “Black Ponies,” which operated in Vietnam from April 1969 to April 1971, also used the OV-10A as a light ground attack aircraft and for interdiction of enemy logistics, as well as for fire-support of Marines, SEALs and Mobile Riverine Force vessels. While it was largely successful in those roles, the Navy lost seven during the war to various causes.

After the war, many of the Broncos found use in a non-military capacity, and the aircraft proved ideal for aerial mapping, geological survey, spraying, disaster relief and patrol work. At least half a dozen Air Force surplus Bronco’s were transferred to the United States Forestry Service in the 1980s where the aircraft were used as spotters during fire seasons. Additionally, the AV-10As were used by NASA, the Department of State Air Wing, Bureau of Land Management and California’s Department of Forestry and Fire Protection. The aircraft found use internationally as well, and was used by Germany, Indonesia, Morocco, Philippines, Thailand and Venezuela.