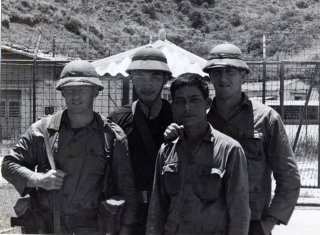 If a conflict in U.S. history ever came with baggage, it has to be the Vietnam War. Although the service and actions of the millions of Americans who fought in Southeast Asia have been slowly recognized, the unpopularity of the war at the time, and for many years after, left a scar in American society. This unpopularity also meant that extraordinary men and units, such as the Military Assistance Command Vietnam-Studies and Observations Group (MACV-SOG), have fallen through the cracks of America’s consciousness, and are only known to a few old comrades, their families, and a handful of military history enthusiasts.

The innocuous-sounding MACV-SOG is such an organization, although its obscurity also has to do with its highly secretive nature.

SOG operators pulled off some of the most impressive special operations of the entire war; including some that seemed to defy logic itself. As successive U.S. administrations claimed that no American troops were outside South Vietnam, several hundreds of special operations troops fought against all odds, and against an enemy who always enjoyed a numerical advantage that sometimes exceeded a ratio of 1:1000.

The most secret unit you’ve never heard of

SOG’s main battleground and focus was the infamous Ho Chi Minh Trail, a complex stretching for hundreds of miles above and below ground, from North Vietnam through Laos and Cambodia into South Vietnam, which the North Vietnamese and Vietcong used to fuel their fight in the south.

What was peculiar about SOG operations was the fact that they happened where U.S. troops weren’t supposed to be. Successive U.S. administrations had insisted that no American troops were operating outside South Vietnam.

SOG commandos, thus, wore no name tags, rank, or any other insignia that might identify them as Americans. Even their weapons had no serial numbers.

Duty in SOG was voluntary and strictly confidential. SOG troops weren’t allowed to disclose their location, missions, or any other details surrounding their covert outfit and they couldn’t take photographs—like all good commandos. However, SOG broke that rule frequently, as the numerous pictures from the time suggest. But as far as the general public was concerned, they were each just another American soldier fighting Communism in Vietnam.

Service in the unit was highly selective. Not only did it recruit solely from special operations units, but the inherent risk required that everyone had to be a volunteer. Approximately 3.2 million Americans served in Vietnam. Of that number, about 20,000 were Green Berets, of those, only 2,000 served in SOG, with just 400 to 600 running recon and direct action operations.

Service at SOG came with an unspoken agreement that you’d receive either a Purple Heart or body bag. SOG had a casualty rate of 100 percent—everyone who served in SOG was either wounded, most multiple times, or killed. And to this day, 50 SOG Green Berets are still missing in action.

What enabled SOG operations was a steady supply of loyal and fierce local fighters who passionately hated the North Vietnamese—and sometimes each other. These local warfighters worked with the American commandos as mercenaries. The “Little People,” as the Americans affectionally called them, proved their worth on the field, against impossible odds time and again.

These local partner forces included Montagnards, South Vietnamese, and Chinese Nungs, among other tribes and ethnicities. Indeed, local mercenaries made up most of SOG recon teams and Hatchet Forces (more on them later). For example, most recon teams would run cross-border operations with between two and four Americans and four to nine local mercenaries. Locals had an uncanny ability—some SOG operators would say a sixth sense—to detect danger. This ability made them perfect point men during recon operations.

Usually, when launching a cross-border recon operation, SOG teams would enter a pre-mission “quarantine,” much like modern-day Army Special Forces operational detachments do before deploying. During this quarantine period, they would eat the same food as the North Vietnamese, that is mostly rice and fish, so they—and their human waste—could smell like the enemy while in the jungle.

Today, where pre-workout and energy drinks are borderline mandatory, even on active operations, such measures might sound extravagant. But in a moonless night, in the middle of the Cambodian jungle, surrounded by thousands of North Vietnamese trackers and troops, something as trivial-seeming as your smell could mean the difference between a SOG team getting wiped out or making it home.

The local troops, having a great understanding of the operational environment, were crucial in the survival of many SOG recon teams. When the war ended, some of them, such as the legendary “Cowboy,” managed to escape to the West and come to the U.S.

Although SOG’s primary mission-set was strategic reconnaissance through its recon teams, it also specialized in direct-action operations, such as raids and ambushes. For these larger operations, there were different outfits within SOG.

The “Hatchet Forces” specialized in raids and ambushes, but also acted as a quick-reaction force for recon teams. Usually, Hatchet Forces were platoon-size and composed of five Americans and 30 indigenous troops. Sometimes, several Hatchet Forces would combine to create a company-size element, called either “Havoc” or “Hornet,” that could be very effective against known enemy logistical hubs or headquarters.

In addition to the Hatchet Forces, there were also the “SLAM” companies, standing for Search, Locate, Annihilate, Monitor/Mission, which were full-sized SOG companies with a few dozen Americans in leadership roles and a few hundred indigenous mercenaries who SOG had recruited.

The first SOG recon teams were called “Spike Teams” (ST), for example, ST Idaho, with the term “Recon Teams” (RT), for instance, RT Ohio, becoming more popular later in the war. Usually, SOG commandos named teams after U.S. States, but they also used other titles, such as “Bushmaster,” “Adder,” and “Viper.” The number of active recon teams fluctuated throughout the war, reflecting casualties and increasing demand. For example, at one point, CCC ran almost 30 recon teams.

Some notable SOG missions include Operation Tailwind, a Hatchet Force operation in Thailand and one of the most successful missions in SOG’s history; the Thanksgiving operation, when SOG operator John Stryker Meyer’s six-man team encountered and evaded 30,000 North Vietnamese; the Christmas mission, when Meyer’s team went into Laos to destroy a fuel pipeline but almost got burned alive by North Vietnamese trackers who lit the jungle on fire; Operation Thundercloud, in which SOG recruited and trained captured North Vietnamese troops and sent them to recon operations across the border dressed like their former comrades; and Recon Team Alabama’s October 1968 mission that accounted fora whopping 9,000 North Vietnamese killed or wounded in action.

What stands out about SOG is how much responsibility was placed on its young operators. Legendary SOG operator John Stryker Meyer, for example, was running recon as a One-Zero (team leader) at the age of 22 and just an E-4. And rules of engagement were quite different, with less bureaucracy impeding the guys on the ground.

“And, today, they call can’t believe lowly E-4s were directing air strikes, total control on the ground, and experienced troops had final say on teams, regardless of rank. Experience over rank.”

Meyer has written extensively about SOG and his hair-raising experiences in the unit.

Although techniques, tactics, and procedures were generally the same among the three SOG subcommands, SOG teams adjusted their approaches according to their geographical area. Laos, for example, has more mountains and jungle than Cambodia, which is flatter and more open.

Saviors from above: SOG’s Air Commandos

Pivotal to the success and effectiveness of MACV-SOG operations across the border were several aircraft squadrons from across the services and also South Vietnam.

The Green Hornets’ Hueys came packed with an assortment of weapons, including M-60 machine guns, GAU-2B/A miniguns, and 2.75-inch rocket pods. If ammo ran out, door gunners would lob grenades or shoot their individual rifles.