Visiting Elderly Parents During the Pandemic Is an Unnecessary Risk 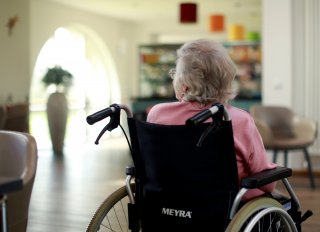 A lot of people are facing ethical decisions about their daily life as a result of the coronavirus. Ethicist Lee McIntyre has stepped in to help provide advice over the moral dilemmas we face.

Ellen D. from Boston asks: "My family is considering driving from Boston to New York for the day to see my mother. We believe if we just sit outside with her it will improve her spirits, and ours. She is adamantly against us going, but we know she will be happy if we do so. Should we go? Are we putting anyone at risk other than my mother?"

Why in the world would you want to do something that your mother is adamantly against, on the perhaps mistaken belief that you know better than she does what would make her happy? Even if this were a trivial matter – along the lines of “taste this food, I know you’ll like it” – one questions whether this is the right approach.

But especially in a time of pandemic, why would you risk your mother’s health for something she does not want? You cannot say there is no risk – in your question you ask whether there is risk to anyone besides your mother, which demonstrates that you acknowledge it exists.

One of the central debates in ethics is over respect for autonomy. Should you ask someone to perform an action that violates their personal moral beliefs just because it serves some presumably greater moral outcome?

In schools of thought in which the morality of actions is judged by their consequences, such as utilitarianism, debate rages over whether it is selfish for an individual to care more about their own happiness over that of a larger number of people. The classic example – often used to critique utilitarianism – is whether you should be required to kill another person if doing so would save a greater number of lives.

In ethics class, we consider this by way of the well-known “trolley problem” – if an out-of-control train were coming down the track, headed straight for five people, would you push one bystander in its way to save the five? It may be the “greater good,” but could you bring yourself to do it? And are you immoral if the answer is no?

Some people see such a violation of individual autonomy as evidence that the moral demands made by utilitarianism are absurd. How could it be moral to ask someone to perform an action that they personally oppose?

In your case, though, even if you were a utilitarian, I think you would be on shaky moral grounds. Suppose your visit backfired and it made your mother terribly upset or – worse yet – she got COVID-19. Or perhaps you’ll waste the first half of your visit talking about the fact that she told you not to come, but you did anyway. You can’t rule out these unpleasant scenarios.

And even if you had an entirely safe and pleasant visit, you have to wonder whether the violation of your mother’s autonomy is worth the potential to try to increase the sum total happiness – even including hers.

Lee McIntyre is a Research Fellow at the Center for Philosophy and History of Science, Boston University.