Vladimir Putin Is No Mastermind, But He Has Played Russia's Cards Well 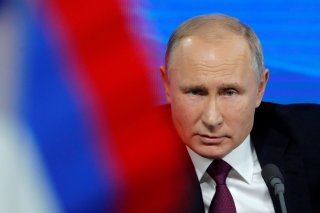 Here's What You Need To Remember: Winston Churchill was right about Russia during World War II when national survival was at stake. Back then fending off military menaces came before all else. And the Russian national interest remains a good way to decipher Russian actions. Applied to Putin’s Russia, though, Churchill’s diagnosis is incomplete. Russia is less an enigma than a product of its unique history combined with basic human passions that endure from age to age. These forces shape politics and strategy in Moscow.

Winston Churchill’s truism that Russia is “a riddle wrapped in a mystery inside an enigma” remains as acute as it was when he articulated it during an October 1939 BBC radio address. It verges on impossible to forecast what Moscow will do tactically. What it will do strategically, however, is more intelligible and thus more predictable.

Perhaps, added the future prime minister, “there is a key” to the riddle—namely “Russian national interest.” Seeing Nazi Germany overrun southeastern Europe or the Black Sea basin “would be contrary to the historic life-interests of Russia.” He delicately avoided mentioning that the Soviet Union and Germany were fresh off conquering and partitioning Poland under a secret pact, doing so the month before Churchill took to the airwaves. Had he included the invasion in his catalog of Russian interests, he would have seen that it made perfect sense to Soviet leaders to seek a strategic buffer in Poland. It advanced the national interest as the Soviets reckoned it.

It’s a question that’s ripped from the headlines yet feels like a throwback. In recent years, Russian warplanes have resumed their Cold War practice of buzzing American ships or aircraft that venture into any sea or airspace that Moscow considers a Russian preserve. The Black Sea has been a favorite arena for mock combat, as Churchill might have prophesied judging from his BBC address. U.S. Navy destroyers cruising there have repeatedly filmed Russian planes making close, unsafe passes. The crew of USS Donald Cook must have felt singled out: the ship endured harassment in both the Black Sea and Baltic Sea.

But Russian aviators seem to have taken routine probing of United States and allied air defenses uptempo since the coronavirus swept the globe. Twice in recent weeks, for example, Russian aircraft have passed within twenty-five feet of U.S. Navy P-8 surveillance planes over the Mediterranean Sea. Twenty-five feet is a hair’s breadth in aviation terms, as a Chinese fighter jock found out in 2001 after colliding with a U.S. EP-3 surveillance plane over the South China Sea and plunging to his doom. A longstanding agreement between Washington and Moscow proscribes such hotdogging for fear it will provoke an armed clash.

Nor do close-quarters encounters exhaust the spicy news out of the Russian military. For example, the New York Times carried an intriguing story about the ultra-deep-diving submarine Losharik, which suffered a fire sixty miles off the Norwegian coast last year. Fourteen Russian sailors perished in the blaze, which seems to have ignited in the nuclear-powered boat’s battery compartment. There’s far more to the story than human drama, though. The New York Times notes that Losharik is far from your ordinary submarine. Naval historian extraordinaire Norman Polmar estimates that the boat can dive to a maximum depth somewhere in the neighborhood from eighty-two hundred to twenty thousand feet.

No manned sub in the U.S. Navy inventory approaches even Polmar’s lower figure. Americans deploy unmanned underwater vehicles when they want to plumb the oceans’ deepest recesses. Losharik’s hull is evidently built around a series of titanium spheres housing the control room, living spaces, and machinery spaces. Spheres are strong when made of stout materials. Hence the boat can voyage to the bottom of the sea without being crushed by extreme pressure. Why bother building such a craft? Well, the official account out of Moscow depicted its mission as scientific in nature. That Losharik was undertaking research when it caught fire is plausible, true or not. Humanity has much to learn about the underwater realm.

But Losharik’s ability to prowl the seafloor gives the Kremlin less benign options as well. Options like cutting transoceanic cables that provide internet connectivity, connect up the world’s financial institutions, and on and on. Severing an antagonist’s communications is a time-honored opening move in the war. Great Britain cut the telegraph cables connecting imperial Germany to the world at the outset of the Great War a century ago. Information and disinformation warfare is a field of combat Moscow likes to bestride. Losharik supplies a weapon for waging it.

Losharik’s crew could also attack Western anti-submarine sensors strewn across the seabed in the Greenland-Iceland-U.K. gap and other narrow passages. Puncturing Western navies’ monitoring capability would clear a transit corridor for Russian Navy boats into the North Atlantic high seas or other operating grounds, where detecting, tracking, and assailing them is far harder than in confined quarters. In short, the Losharik disaster shines a spotlight on yet another Russian implement for making mischief at Western expense.

All is not rosy for Moscow, though. The Russian armed forces—like all armed forces—have to live within their means. Russia depends heavily on exporting oil and natural gas, so low energy prices constrict its national income and thus its ability to afford pricey armaments. Prices have been low for some time and have run off a cliff amid coronavirus lockdowns. Just this week, for instance, the news broke that the Severnoye Design Bureau, a division of the United Shipbuilding Corporation, has halted the development of a nuclear-powered destroyer and a bulked-up variant of the Russian Navy’s Admiral Gorshkov-class frigate. Summarily canceling two marquee projects can’t be good tidings for Russian sea power.

In fact, Russian weapons acquisitions invert the pattern from the Cold War, when the Soviet military was vast in numbers but backward in technology. Quantity, believed Soviet chieftains, boasted a quality all its own. Modern-day Russia prefers to invest in small numbers of high-quality armaments at the expense of quantity. Whether Russian mariners, aviators, and soldiers can compensate for the resulting shortfall in mass remains in doubt. Quantity isn’t everything. But if the lynchpin of strategy is to deliver more combat power than the foe at the scene of combat at the decisive time, a few impressive platforms may not suffice. Quantity still matters.

So much for the roundup of Russian defense news. How to make sense of Russian motives underlying the news? Well, two millennia ago Thucydides posited that fear, honor, and interest represent three prime movers impelling human actions. Start with the Russian national interest, as Churchill did in 1939. Peacetime military strategy is an armed conversation with opponents, allies and friends, and prospective allies and friends. The conversation is about relative power and weakness. Not just pugilists but spectators decide the outcomes of peacetime confrontations between armed forces. Whoever most observers believe would have won in wartime tends to come out ahead in peacetime. Shaping perceptions, then, is armed conversationalists’ goal.

General George S. Patton explained the logic in his famous address to the Third Army: people flock to a winner and scorn a loser. Buzzing ships or warplanes might cow U.S. crews over time, rendering them risk-averse. That’s one audience for Russian antics. But the Kremlin’s true aim is to project an image of power and resolve, molding perceptions in capitals that matter. Shaking confidence in U.S. military might dishearten political leaders and ordinary citizens in countries where Moscow covets influence—NATO members, former Soviet republics, and former Eastern Bloc states in particular. If U.S. allies and friends come to disbelieve in their superpower protector, they will prove increasingly pliant when Russia demands something. Patton would instantly grasp the reasoning behind Russia’s playground hijinks. They could help the Kremlin get its way.

Fear blends with the Russian thirst for honor. During the 1990s Moscow watched as the West intruded into the former Soviet space and, in some cases, made allies out of former Soviet republics or Warsaw Pact clients. NATO waged war in the Balkans, a region Russians have long regarded as a sphere of interest, etc. Events fanned Russia’s ingrained paranoia about Western martial endeavors around its periphery, and there was little Moscow could do about them during that chaotic phase in Russian history. It only seems natural for Moscow to reassert itself in its near abroad now that it sports the wherewithal to do so.

So warlike one-upmanship helps Russia burnish its image as a virile political and military force after the traumatic 1990s. It holds fear at bay while earning new respect. Or as Thucydides might put it, provoking small-scale armed encounters in which U.S. forces remain passive slakes Moscow’s thirst for honor. Fear, honor, interest; primal motives drive moderns the way they drove the ancients. But don’t rule out other motives, either. Thucydides doesn’t claim that fear, honor, and interest are the only motives that animate human beings, just three of the strongest. There are others.