Want More Stimulus Payments? Study This Picture and Do It. 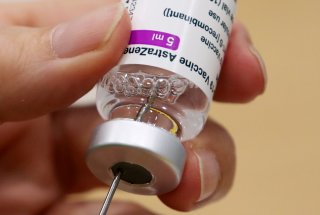 Here's What You Need to Remember: If people don’t get their vaccine, then perhaps they don’t need the money all too badly. Talk is cheap; money talks.

There’s little questioning the fact that the one hundred sixty-three million coronavirus stimulus checks disbursed to date have helped many financially wounded Americans amid the ongoing pandemic.

But it appears that many Americans aren’t doing their part to get vaccinated against the virus—which could be partly to blame for many people still clamoring to see a fourth or even a fifth round of stimulus checks.

According to White House chief medical adviser Dr. Anthony Fauci, roughly 75 percent to 80 percent of the population needs to get vaccinated in order to achieve herd immunity—which aims to have enough people within a population become immune to a disease, often through vaccination or natural infection, to make its spread unlikely. As a result, the entire community is protected, even those who are not themselves immune, according to Harvard Medical School.

However, the effort to attain herd immunity by this summer seems to be slipping away because a quarter of Americans are refusing to get a COVID-19 vaccine, according to a recent NPR/Marist poll. Moreover, another 5 percent are “undecided” about whether they would get the shot.

Against this backdrop, people have brought up the idea of using stimulus checks as pay incentives to get Americans vaccinated.

One St. Louis Post-Dispatch reader wrote: “Even before the Johnson & Johnson vaccine scare, one in four people refused to get vaccinated. Now those numbers are much higher. Sadly at this point, there’s little that anyone can say to convince many of those stubborn, self-centered refusers to get vaccinated before it mutates into something much worse.”

He continued: “This could have been so easy, without resorting to making it mandatory. Our government simply should have made a very small requirement in order to receive our $600 and $1,400 stimulus checks. If people don’t get their vaccine, then perhaps they don’t need the money all too badly. Talk is cheap; money talks. It could have been just that easy, but it’s too late now. Our government blew it big time.”

Some Washington lawmakers have also chimed in with similar sentiments. For example, Rep. Steve Stivers has admitted that he would be willing to make vaccination a requirement before receiving stimulus checks.

“It’s so important that we build herd immunity as soon as we can. While I am not for giving a $1,400 stimulus check for anything, I’d be willing to sign off on a stimulus check of $1,400 for people who take the vaccine,” he said in an interview on Yahoo Finance Live.

Also, companies like Target, Trader Joe’s, and Dollar General are part of a large list of U.S. businesses that offer pay incentives to hourly employees to receive a vaccine.

“Taking care of our team has been at the heart of every decision we’ve made since the coronavirus started, and this point in the pandemic is no different,” Melissa Kremer, Target’s chief human resources officer, said in a blog post.