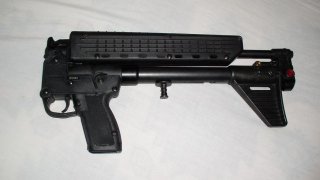 Here's What You Need To Know: The CMR-30 resembles a personal defense weapon but is much cheaper.

Kel-Tec’s CMR-30 is an odd mixup of guns. While it uses the same grip and magazines from the highly similar PMR-30, it ditches the partial slide of that gun for a fully enclosed upper receiver with an internal bolt. It also incorporates features of military PDWs like the MP7 and P90 with a highly MP7 style collapsing stock and P90 style charging handle.

The result is a gun that very much resembles a PDW, albeit in .22 Magnum, rather than in a proper PDW cartridge. This is logical, as the PDW cartridges used in the P90 and MP7 were developed with the specific purpose to penetrate 1980s Soviet body armor. Their flat-shooting trajectory was a side effect of the velocity required to fulfill that requirement. As civilians cannot buy these proper armor-piercing rounds, chambering a “civilian PDW” in .22 Magnum makes a lot of sense, as it provides the same flat-shooting trajectory in a cheap civilian round.

However, in order to legally qualify as a rifle, the CMR-30 has a sixteen-inch barrel, unlike the shorter barrels of military PDWs. This is largely due to legal restrictions in the US regarding the sale of short-barreled rifles (SBRs), which the CMR-30 would qualify as due to its stocked nature. While creating an arm brace for the CMR-30 would allow it to be sold as a “pistol”, Kel-Tec probably made the gun with a sixteen-inch barrel to cater to a wider variety of customers, some of whom may live in states that forbid the sale of “assault pistols.”

Shorter barrels do exist for the CMR-30 if one desires to go through the SBR paperwork, with one installed the CMR-30 acquires a distinctly PDW look.

However, the CMR-30 oddly lacks some features that true PDWs have, as well the refinement of the leading PDW on the market, the H&K MP7. The CMR-30 is straight blowback like the FN P90, resulting more recoil than a locked-breech system. While recoil is still negligible with the P90 and CMR-30, the MP7’s short-stroke system makes it even gentler.

The MP7 also has a last round bolt hold open, where the CMR-30 doesn’t. It’s unclear why the CMR-30 doesn’t include a last round bolt hold open, as the PMR-30 locks open on the last rounds, so the follower in the magazine is definitely capable of locking the bolt open. There’s even a lever near the front of the trigger guard, where a bolt catch would logically go, but on the CMR-30 this lever acts as the stock release. While this allows for the stock to be deployed quickly, one can’t help but think that a bolt release would be more practical for most shooters.

The position of the charging handles on each side of the gun, while ergonomic and easy to pull, prevent the mounting of accessories on the side of the gun. While the average Kel-Tec owner probably isn’t planning on putting lights and lasers on their CMR-30, this is a limitation nonetheless.

Overall, the CMR-30 is a decent attempt to cater to the American shooting populace who want a PDW-style firearm, but at a low cost without the hassle of buying niche ammo or going through SBR procedures. But as the saying goes, “you get what you pay for,” and the CMR-30 lacks many of the features and thoughtful design elements of some more expensive PDWs.