Want to Sink an Aircraft Carrier? You Might Need a Nuclear Weapon. 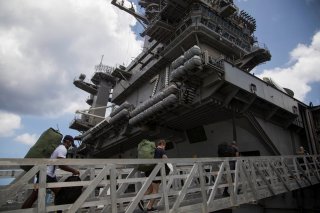 Here's What You Need To Remember: The one real concern is missiles - which are getting progressively faster and harder to shoot down. But carrier defenses are advancing, too.

Carriers do not operate alone:

Carriers typically deploy as part of a "carrier strike group" that includes multiple guided-missile warships equipped with the Aegis combat system.  Aegis is the most advanced air and missile defense system in the world, capable of defeating every potential overhead threat including ballistic missiles.  It is linked to other offensive and defensive systems on board U.S. surface combatants that can defeat submarines, surface ships and floating mines, or attack enemy sensors needed to guide attacking missiles.  In combination with the carrier air wing, these warships can quickly degrade enemy systems used to track the strike group.  Carrier strike groups often include one or more stealthy attack subs capable of defeating undersea and surface threats.

The bottom line on aircraft carrier survivability is that only a handful of countries can credibly pose a threat to America's most valuable warships, and short of using nuclear weapons none of those is likely to sink one. Although the Navy has changed it tactics to deal with the proliferation of fast anti-ship missiles and the growing military power of China in the Western Pacific, large-deck aircraft carriers remain among the most secure and useful combat systems in America's arsenal.  With the unlimited range and flexibility afforded by nuclear propulsion, there are few places they can't go to enforce U.S. interests.  And at the rate the Navy is investing in new warfighting technologies, that is likely to remain true for many decades to come.

Loren B. Thompson is Chief Operating Officer of the non-profit Lexington Institute and Chief Executive Officer of Source Associates, a for-profit consultancy. Prior to holding his present positions, he was Deputy Director of the Security Studies Program at Georgetown University and taught graduate-level courses in strategy, technology and media affairs at Georgetown. He has also taught at Harvard University’s Kennedy School of Government. This article first appeared several years ago.