War in the Med? How Energy Spiked Tensions Between Greece and Turkey 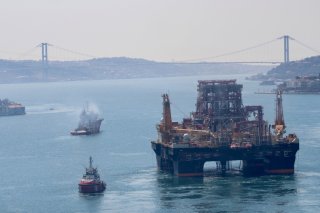 Turkey and Greece – two Nato allies – are at odds with one another in the eastern Mediterranean. The tension has escalated as a result of provocative displays on both sides. Greece’s latest move has been to conduct a four-day naval exercise near Crete. Turkey, meanwhile, has extended its seismic survey operations, deploying a research ship in the same disputed region around Crete.

These actions heighten the risk of escalation, evident from a recent minor collision on August 12 between a Greek and Turkish vessel in the area. According to a Greek defence source, a Greek military ship, Limnos touched the rear of a Turkish military ship, Kemal Reis, which was escorting the Turkish research ship.

Turkey and Greece have been at loggerheads in the Aegean Sea since the mid-1970s but have abstained from unilateral actions that might result in full conflict. They have been able to defuse several escalations with diplomacy and dialogue. Certainly, the mediation of the US had a crucial role in maintaining the stability.

Adding the eastern Mediterranean into the mix complicates matters though. The two sides appear to have opened Pandora’s box.

On the surface, the disagreement is over the two countries’ conflicting views on eastern Mediterranean maritime jurisdiction and energy resources. However, the involvement of the EU and countries including Israel, France, the United Arab Emirates and Egypt (as well as Cyprus) is further complicating the situation. The deterioration of Turkey’s relations with the EU and these countries paves the way for a new alliance against it.

What’s at stake in the eastern Mediterranean?

Discoveries of energy resources off the coasts of Israel, Cyprus and Egypt boost the potential of the eastern Mediterranean. The discovery of a massive gas field off Egypt’s coast in 2015, in particular, has raised the possibility of exporting regional energy to Europe. Conflicting sovereignty claims over the waters of the eastern Mediterranean have therefore caused a rather tense political environment.

New regional alliances have been sprouting with these energy reserves in mind. An initial agreement between Greece, Cyprus, Italy and Israel on the East-Med Pipeline Project transformed into a Forum with the involvement of Egypt, Jordan and Palestine. But Turkey, Lebanon and Syria have found themselves excluded.

Turkey’s “assertive foreign policy” choices over the years have damaged its bilateral relations with both Egypt and Israel. Strained relations with western allies have further isolated Turkey in the region.

Until all this, countries in the region had taken a balanced stance on tensions between Turkey and Greece. However, the US recently lifted a 33-year arms embargo on Cyprus and beefed up its military cooperation with Greece, sending a powerful message to Turkey about its alliances.

In order to emerge from its regional isolation and prevent the East-Med Gas Forum from connecting regional energy resources to Europe via Cyprus and Crete, Turkey signed a “delimitation of maritime jurisdiction” agreement with the UN-backed Libyan government. This agreement permitted Turkey’s research activities in the disputed waters between Cyprus and Crete in late July. Before that, it had mainly focused its maritime activities in the contested areas around Cyprus, where it has overlapping claims of jurisdiction over offshore energy research.

Following appeals from Germany and Spain, Turkey suspended its activities around Crete. But tensions flared once more when Greece signed the EEZ declaration with Egypt. Both Turkey and Greece have proclaimed the other side’s agreements to be null and void.

And so several countries have been drawn into the long-running standoff between Greece and Turkey. Backing from these countries only encourages Greece and Turkey to take more risky steps rather than backing down. The US was the crucial link holding order in place so now it appears to be siding with Greece, the tension will not settle down easily.

It would be naive to expect rationality in both Greece and Turkey’s policy choices due to their long history of rivalry. But they have long agreed on how matters should be handled. Both choose to militarise issues to bolster their domestic political support. The tension provides a tool with which to trigger nationalist sentiments at home. By insisting on their “maximalist approaches”, both Turkey and Greece use the issue to offer a distraction from other problems – such as the economy and pandemic.

Greece and Turkey have endured plenty of incidents that brought them to the brink of war, particularly in the Aegean Sea, but these were eased through dialogue and mediation. There is no dialogue mechanism established for a conflict over the eastern Mediterranean and that really matters in this conflict-ridden region. Germany is calling for a new dialogue but neither Turkey nor Greece seem ready to make concessions and return pragmatism yet.