Warship Mystery: How Did This Battleship's 16-Inch Gun Explode? 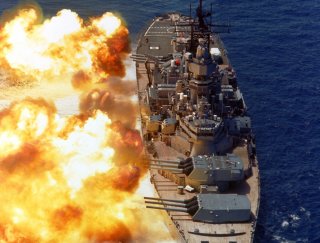 Here's What You Need to Know: The military often looks for scapegoats when people die rather than admit their mistakes.

It's been over 30 years since an explosion inside the number two gun turret on the USS Iowa killed 47 American sailors, but for Mike Carr, it still feels like yesterday.

"I knew all 47 guys inside that turret because as part of the ship's policy we had rotated between all three turrets," Carr, who served as a gunner's mate in the Iowa's aft 16-inch turret, told Task & Purpose. "We all knew each other rather intimately."

On April 19, 1989, the day of the blast, the ship was preparing for live-fire training at Vieques, Puerto Rico Naval Training Range.

Carr was wearing headphones that allowed him to hear what the crews in the other turrets were saying.

"At 10 minutes to 10 a.m., somebody came over the phones and said, 'We're having a problem, Turret 2, center gun,'" Carr recalled. "Then approximately two minutes later, I recognized Senior Chief [Reginald] Ziegler, who was the chief in charge of Turret 2, yell into the phones: 'Fire, fire, fire! Fire in center gun, turret 2. Trying to contain it.'"

Then came the blast, which was so strong that it ripped the headphones right off Carr's head.

Black smoke poured out from the burning No. 2 turret as Carr and other sailors donned their firefighting gear. Then they found two sailors who had been blown from the turret onto the deck.

Carr was eventually able to climb into the wrecked turret. The scene inside was too terrible to describe. He battled to contain the fire until he passed out from smoke inhalation, waking up later in an emergency dress battle station.

It took the sailors eight hours to douse the blaze. Luckily, the fire did not set off the powder bags in the other two guns.

In the years since the blast, Carr has surmised what might have happened. It's possible that the powder bags began to smoke because they were old, so the gun captain rammed the bags with too much power.

"This is just from my experience of three years of working and shooting those guns: Eventually the powder bags ripped … and the rammer head or the rammer chain sparked, and that's what set off the first explosion," Carr said.

The guns' lubricants were the next to ignite, he said.

"The powder door was still open to the center gun — that armored hatch was still open," Carr said. "That fireball went straight to the bottom of the turret. When we're doing a shot with more than three shells, you would stage powder bags inside the powder flats. So when that flame came down, all those powder bags went off, and that was the third and final detonation."

The last explosion was so strong that it blew the turret's two-ton hatch off its hinges and into the water, he said.

The deadly blast aboard the Iowa marked the first explosion in a battleship turret since 1943, when 43 sailors aboard the USS Mississippi were killed, the Government Accountability Office later determined. But unlike other explosions, the 16-inch gun in the No. 2 Turret was cold, meaning it hadn't been fired yet.

It wasn't long after the Iowa returned home that the Navy seemed to be looking for someone to blame the disaster on. Those people turned out to be Gunner's Mate 2nd Class Clayton Hartwig, whom the Navy had initially claimed had loaded the gun before it exploded, and his best friend, Gunner's Mate 3rd Class Kendall Truitt.

"Interestingly, I was never read my rights, nor did I realize that I was a suspect," Truitt told Task & Purpose. "I just thought they had some really strange questions for what I assumed was an honest attempt at an investigation."

Truitt was in the magazine below the No. 2 turret when the gun exploded above him. He braved the flames, smoke, and carnage inside the turret to turn on sprinklers so that bags of gunpowder would not go off, and he secured hatches so that the accumulating water would not sink the ship, he told Penthouse in a January 1990 interview.

But when investigators learned that Hartwig had named Truitt the beneficiary of a $100,000 life insurance policy, they claimed that Hartwig — who died in the blast — had planted a bomb in the gun. They further claimed Hartwig became suicidal because he and Truitt – who was married at the time – had been lovers but Truitt had rebuffed him.

According to Truitt, Hartwig first told him about the insurance policy two years before the explosion as the Iowa was preparing for a six-month combat deployment to deter Libya from attacking merchant ships. All of the crew had been advised to set up allotment accounts for their families. While at Navy Federal, bankers told Hartwig that buying an extra life insurance policy would only cost $4 per month. He already had policies that named his parents and another friend as beneficiaries.

Hartwig's father had seen combat in the Navy as a gunner's mate, Truitt said. At the time, sailors in his father's division all took out life insurance policies on each other.

After the explosion, Truitt mentioned the insurance policy in passing to Hartwig's family. They subsequently wrote lawmakers saying that it was unfair Truitt would receive the money instead of Hartwig's parents.

Another sailor, David Smith, claimed that Navy investigators had coerced him into telling them Hartwig propositioned him and discussed how to use a bomb's timer, the Washington Post reported in September 1989.

The military looks for scapegoats when people die rather than admit their mistakes – or acknowledge that accidents are even possible, Truitt said. In the case of the Iowa, the devastating blast happened toward the tail end of the Cold War, when the Navy felt it needed 600 ships to counter the Soviets. Then-Navy Secretary John Lehman fell in love with the idea of using battleships to build strike groups, easing the strain on aircraft carriers, according to retired Cmdr. Ward Carroll, a naval aviator who was a spokesman for the Naval Safety Center at the time.

But it soon became apparent that the World War II-era battleships required too much time, money, and manpower to be overhauled, Carroll said. In fact, the Iowa did so poorly on its first inspection that it was recommended to be decommissioned.

The Iowa subsequently went to the shipyard so its power plant could be improved, but its gun systems weren't updated, he said. It was also clear that each 16-inch gun turret required more sailors than the Navy could afford to assign.

"It's a classic example of Navy leaders not being willing to speak truth to power and make the hard decisions," Carroll said. "If this story sounds familiar, it's because this is kind of the oldest story ever told around the U.S. Navy."

Rather than admitting that the age of the battleship was over, Navy leaders cut corners on training, manpower, and maintenance to get the Iowa back out to sea, he said.

"The sad thing is I understand what they were doing and why they were doing it," Truitt told Task & Purpose. "They were trying to build up the Navy. The military eats their own – it takes a while to realize that."

Facts later emerged that undermined the Navy's first investigation into the explosion, Truitt said. For example, Hartwig had not been responsible for loading the gun, as the Navy initially claimed.

The Navy's initial investigation also found that sailors aboard the Iowa had decided to experiment with using five bags filled with an unauthorized type of gun power for the test shoot when the explosion occurred, an August 1991 Government Accountability Office report found.

Sandia National Laboratories later determined that the powder had been rammed 24 inches too far, compressing the powder charge against the base of the dummy projectile before it ignited, the GAO report said.

"Imagine an old timey cap gun, where you remove the caps, and bang them with a hammer," Truitt said. "This is essentially what happened."

Although the Navy never officially determined what caused the Iowa explosion, it made a series of changes to how 16-inch guns were operated after independent tests by Sandia National Laboratories showed that powder bags could detonate when accidentally rammed too hard.