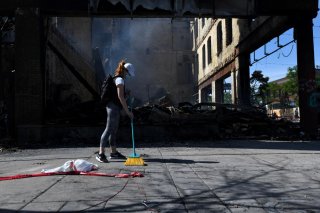 About 17% of Americans said rioters’ actions during the George Floyd protests, “including the burning of a police precinct,” are fully justified, according to a national poll released Tuesday.

Thirty-seven percent of respondents said the actions by rioters are “partially justified,” while 38% said they can’t support the violence in any capacity. Over half of Americans said the anger behind the protests is warranted at 57%, the Monmouth University poll found.

When it came to personal experience, 28% of adults said they or an immediate family member has been harassed by law enforcement, which was further broken down by race: 44% of black respondents, 24% of white respondents and 28% of other minorities who responded.

Roughly seven in 10 people — regardless of race — spoke favorably about their hometown officers.

Seventy-six percent of Americans said the United States has a racial discrimination issue, and 53% said it has only been exacerbated since President Donald Trump took office. A majority of Americans seem to echo this negativity toward the president in job approval, as 54% of Americans do not approve of Trump’s performance amid the COVID-19 pandemic.

Protests following the death of Floyd, who died May 25 after a Minneapolis police officer knelt on his neck for several minutes, according to footage, have sparked numerous violent riots. More than 30 cities have experienced unrest in some form and 25 of those cities have imposed mandatory curfews, according to Newsweek.

The National Guard has been activated in Washington, D.C., and 15 other cities, per a statement obtained by Newsweek.

The Monmouth University poll was a random sample of 807 adults with a margin of error of +/- 3.5%.

Image: Minneapolis resident, Andrea Stoesz, cleans up outside the burned out bar Nuevo Rodeo across from the Minneapolis Police fifth precinct after the death in police custody of George Floyd in Minneapolis, Minnesota, U.S. May 31, 2020. REUTERS/Nicholas Pfosi.