Was Opening Up To China Really a Mistake? 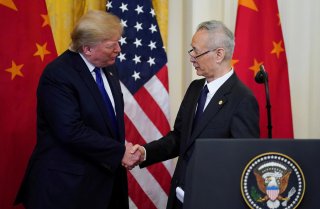 It is increasingly common for politicians and pundits in Washington to look upon China’s numerous recent offenses and point fingers not at Beijing but inward at a specific U.S. policy from 20 years ago: granting China “permanent normal trade relations” (PNTR) and the country’s subsequent entry into the World Trade Organization (WTO). This event, so the story goes, was an epic American blunder that not only fueled China’s rise and the now‐​famous “China Shock”—the period from 1999 to 2011 in which increasing Chinese imports supposedly destroyed approximately millions of jobs – but also today justifies a total rethink of U.S. foreign and economic policy. For example, Senator Josh Hawley (R-MO) recently used this now‐​familiar refrain on the Senate floor to justify his bill withdrawing the United States from the World Trade Organization entirely:

Since Beijing won Most Favored Nation status and joined the World Trade Organization in 2001, we have lost over three million jobs to China. During the past two decades, as we fought war after war in the Middle East, the Chinese government systematically built its military on the backs of our middle class.

We were promised things would be different. We were told that giving China access to our markets and allowing them power in the WTO would reform their behavior, make them more liberal. We were told it would be good for America and for the world.

Well, the only nation it was good for was China. And we cannot afford inaction any longer.

As I explain in a new Cato Institute paper out today, however, the trendy caricature of a naïve U.S. government fueling the destruction of the American worker in the futile hope of Chinese democratization suffers from several flaws that collectively prove fatal for the anti‐​engagement, anti‐​PNTR thesis:

Together, these points dismantle now‐​popular assertions from American politicians and pundits that engagement with China in the 1990s and 2000s was an obvious mistake and that denying China admission to the WTO was realistic a policy choice that would have improved U.S. economic and geopolitical standing today.

China’s rise could present this generation’s most pressing geopolitical issue, and the Chinese Communist Party’s human rights abuses, territorial expansionism, global health transgressions, and economic reversals certainly deserve criticism and responses from the U.S. government. Proposed solutions to these and related issues, however, should stand on their own merit – not by pretending that they are an essential correction of the “mistakes” of PNTR, China’s WTO accession, and economic engagement more broadly.

Doing so would inevitably inhibit better US‐​China policy – and at a time when it’s most needed.

This article by Scott Lincicome first appeared in CATO on July 8, 2020.