Was the USS Missouri the Greatest Battleship Ever? 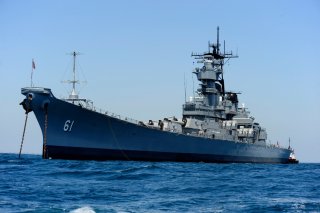 Here's What You Need To Remember: USS Missouri, the third laid down but last completed of the Iowa class, carried a slightly heavier main armament than the South Dakotas and could make five extra knots. The Iowas were the first U.S. Navy battleships to make speed a primary value, and achieved the speed through a longer hull and more powerful machinery. Indeed, the Iowas are the fastest battleships ever built, outpacing even the Italian Littorios by a knot or two.

After the surrender ceremony, Missouri participated in Operation Magic Carpet and some occupation-related activities, then retired to the United States and training duties. In part because of the affection that President Harry S. Truman had for the ship (he hailed from Missouri, and his daughter christened the battleship), Missouri remained more active than its sisters in the immediate postwar period. This included a major show-the-flag cruise in the Mediterranean, reaffirming the U.S. commitment to the security of Greece and Turkey. Active at the beginning of the Korean War, it carried out shore bombardment missions along the Korean peninsula for the better part of three years. After the war, Missouri again served as a training ship before entering reserve in 1955.

This first appeared in 2019 and is being reprinted due to readers interest.