Watch Out: Academia Has Declared War on Military History 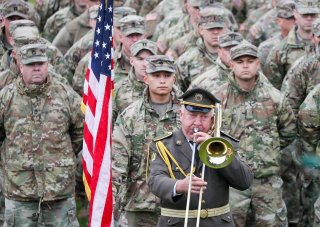 Here's What You Need To Remember: In today’s great power competition, knowledge, critical thinking and prudent judgment are as vital as military hardware, artificial intelligence, and powerful economies. In our hyper-competitive world, we need all hands—and brains—on deck.

Distinguished war historian Max Hastings recently lamented, “In centers of learning across North America, the study of the past in general, and of wars in particular, is in spectacular eclipse.” This created a bit of a buzz among “classically” educated national security professionals—i.e., those who learned the blocking-and-tackling basics of their field through the study of history.

But this “buzzing” matters little. While they would like history to be used to help keep America safe, free and prosperous, these folks don’t control how history is taught and propagated. That’s controlled by American academia, American universities have no intention of fixing the problem. Instead, they are unilaterally disarming America’s knowledge base.

Fewer and fewer major universities promote world-class work in the military history field. There are probably two basic reasons for that. One is that, in this field, universities mostly function to produce scholars for other universities. As the demand for such academic scholars dissipates, so do universities’ investments in the field. And it’s a field particularly unattractive to foreign “investors.”

U.S. universities rake in billions in foreign investments. China alone averages a billion dollars a year. Pretty much all of it goes to hard science and engineering. Military history goes empty-handed.

Hastings highlights a second reason military history is dying on the hill. “The revulsion from war history may derive not so much from students’ unwillingness to explore the violent past,” he suggests, “but from academics’ reluctance to teach, or even allow their universities to host, such courses.” The presumption in much of modern academia appears to be that 1) only warmongers would teach about war and 2) most military history, like much of history, is a tool of institutional oppression and control.

As one historian noted, “Unfortunately, many in the academic community assume that military history is simply about powerful men—mainly white men—fighting each other and/or oppressing vulnerable groups.” Indeed, much in the manner the 1619 Project seeks to replace history with narrative, contemporary social studies are more inclined to jettison traditional historical studies in many fields.

The witch’s brew of economics and “woke” politics drives much university behavior today. What makes this problem different from the plethora of others is that it does have real national security implications—as serious as Beijing’s influence at American universities, which facilitates the transfer of critical technology to the Chinese military.

In today’s great power competition, knowledge, critical thinking and prudent judgment are as vital as military hardware, artificial intelligence, and powerful economies. In our hyper-competitive world, we need all hands—and brains—on deck.

What trains the human mind to make hard, powerful choices in a chaotic, competitive world is not dogma, but deep thinking—the essential ingredient in all impactful and significant learning. Many disciplines and practices can help develop this skill. In the fields of military competition, international relations, and national security, the value of historical thinking—what’s been called the “concepts of hard thinking about “change over time, causality, context, complexity, and contingency”—is paramount.

How We Got Here from There

The military history enterprise in the United States reached its high-water mark in the aftermath of World War II. Thank the GI bill, which dumped a lot of veterans and money into universities. Also thank the U.S. government, which made unprecedented investments in national security research and development—including the social sciences—that fueled programs at universities and federally-funded research and development centers like RAND.

Having lived through war, veterans understood the value of studying war. Moreover, they brought to the historian’s practice their own visceral, gritty wartime experiences that made national security more than an academic exercise. The academy cranked out academics, but also helped fill the professional ranks of government, the intelligence community and uniformed military. Those professionals subsequently helped shape professional military education.

The glory days began to fade with the anti-war movement of the 1960s, followed by the increasing influence of progressive voices at civilian universities who sought to cut ties with the government’s national security infrastructure. As universities like Harvard expelled Reserve Officers’ Training Corps programs, the military history professors were not far behind.

Traditional military history, with its focus on operational activities, campaigns and strategy, began to wane, as the discipline shifted to “new military history,” which emphasized a variety of social, ethnic, racial and cultural aspects of conflict. In many cases, the focus on these topics supplanted, rather than complimented, the focus of much of the scholarship of the 1950s and ‘60s.

Then 9/11 happened. The military got too busy to take care of military history because it was busy making military history. That was followed by the Obama administration taking a peace dividend, even though there wasn’t much peace. This left the military with less time and money to dedicate to military history, and many of its most vibrant professional programs evaporated or atrophied.

This is not to say there are no world-class programs left. They still exist, both inside government (e.g., the Combat Studies Institute at Fort Leavenworth, Kansas) and outside (e.g., the National World War II Museum in New Orleans). And they may still be found at a few universities like Ohio State. But these remnants constitute platoons, and America needs divisions.

There is no question that the United States needs to better think the future. That requires getting back to fostering critical thinking and judgment, rather than espousing politically correct dogma that may or may not comport with the reality of how the world turns.

This is not to say America needs to save history as a profession or discipline, or to resuscitate traditional historical methods or to “fix” the academy—though all of those would be salutary.

What the United States does need is to get a considered, serious, critical appreciation of military history back into America’s intellectual bloodstream. Two thoughtful scholars, Tami Biddle and Robert Citino got it exactly right:

“Military history ought to be a vital component of a liberal education, one that prepares students to be informed and responsible citizens… Any use of military force is so consequential on so many levels that it demands serious contemplation and full comprehension by all those in a democratic polity who own some piece of responsibility for it.”

Too many of those who are either responsible for—or really care about—this issue are either incapable of or indifferent to addressing this challenge. It is time to bring new voices, new energy, new technologies, and new action to the task.