Watch Out, Kim Jong Un: These Are the Five Weapons the U.S. Marines Will Use Against You 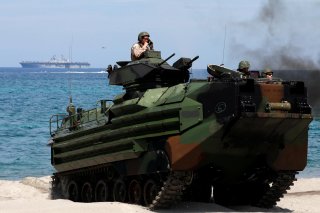 Key point: These weapons will be part of an amphibious invasion to secure North Korean nuclear weapons.

Image: With the USS-Wasp in the background, U.S. Marines ride an amphibious assault vehicle during the amphibious landing exercises of the U.S.-Philippines war games promoting bilateral ties at a military camp in Zambales province, Philippines, April 11, 2019. REUTERS/Eloisa Lopez