We Need To Beat China At Tech. Breaking Up Tech Companies Won't Help. 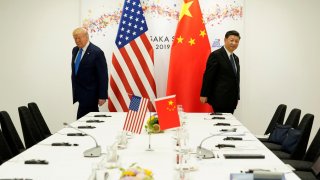 Facebook and Google have argued that breaking them up would damage US competitiveness with China. Vanderbilt Law Professor — and former advisor to Sen. Elizabeth Warren (D-MA) — Ganesh Sitaraman and former Federal Communications Commission Chairman Tom Wheeler (now at the Brookings Institution) take exception. Sitaraman argues in Foreign Affairs that breaking up Big Tech companies would bolster US national security. Wheeler writes that US tech innovation would improve if Big Tech companies were required to make their data assets available to rivals.

It is an open question how regulation might affect whatever competition there might be between the US and China, but Sitaraman and Wheeler are wrong. Sitaraman seems unaware of the five decades of academic research showing that market structure — the number and relative sizes of firms in a market or industry — does not determine the amount of innovation. Wheeler also seems unaware of how markets for ideas work. Here are my explanations.

Both Sitaraman and Wheeler assume that government regulation can define an industry’s market structure, but they are wrong for two reasons.

First, more regulation results in industries having larger firms, not smaller ones, and it also lowers labor productivity. This has been confirmed in several economic studies (see examples here, here, and here). Regulations raise the cost of a firm being in business, which means firms need to be larger to cover those fixed costs.

The other reason is that the economics of social media, search, and e-commerce, etc. have determined today’s market structures. Breaking up the companies wouldn’t repeal these economic realities, so the current market structure would reemerge, except with possibly even larger firms.

Sitaraman assumes that less concentrated markets are more innovative. Decades of scholarly research have shown that this isn’t the case.

But in the 1960s, economists began testing the hypothesis. Studies examined whether an individual firm’s size or the relative sizes of firms in an industry affected research and development or innovation. The Organisation for Economic Co-operation and Development recently released a papersummarizing the research. The summary finds that the relationships vary over time and across industries, so the best conclusion is that firm size and market structure cannot be used to affect innovation.

Wheeler believes that innovation comes from companies analyzing data and selling products. Actually, in the tech space, more and more innovations are coming from decentralized, small-scale innovators. This pattern was discovered in academic research about 20 years ago and still holds.

What is happening is that innovators develop ideas for products and demonstrate their potential value. In a few instances, such as in the case of Facebook, the innovator forms a business and succeeds. But more often than not, the innovators sell their company or at least their product to an enterprise that has a proven business model. This was probably the situation with Instagram, which had a great idea and a weak business model at best before selling to Facebook, which then turned the idea into a profitable business.

Wheeler also appears to believe that if a company is unable to uniquely profit from the data it captures, the company will capture extensive data anyway. I have heard many times the argument that profits don’t matter, such as in the net neutrality debates. But the arguments are always made by people who care very much about the profitability of their retirement savings. So I think they know they are wrong.

Sitaraman also believes that smaller firms would be less likely to want to enter the Chinese market and would thus avoid being compromised by China’s influence. This might be true, but if it is, then it is also true that the US firms would be less active in all global markets, which would decrease US influence. Since part of the rivalry between the US and China is likely to include global influence, retracting US companies from the global economy would certainly decrease US competitiveness.

What’s to be done?

Clearly, some writers need to spend more time reviewing the literature: The flaws in Sitaraman’s and Wheeler’s analyses were refuted long ago by scholarly research. It would also be helpful if advocates for hands-on control of companies were humbler in their beliefs that they fully understand businesses and can redesign them at will.

Learn more: Democrats don’t make a case for regulating Big Tech | Does the US need a financial or tech giant to propel 5G and thwart Huawei? | Left and right should let tech markets work

This article by Mark Jamison first appeared in AEIdeas on August 19, 2020.