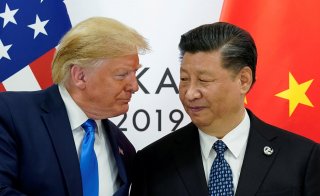 On any given day, my inbox is filled with opinion pieces on U.S.-China relations. A number warn “the U.S. doesn’t need a cold war” or that “a cold war with China would be a mistake.” Others seem to have concluded that we’re already in one, so we’d better get serious about fighting it.

After reading the Trump administration’s “United States Strategic Approach to the People’s Republic of China” – a 16‐​page document issued before the current crackdown on Hong Kong, and apparently drafted even before the COVID-19 outbreak (as it is barely mentioned) – I took a step back.

Prompted by a timely Tweet over the weekend, I thought, “What word best describes US strategy?”

At times, the Trump administration’s approach to China reflects a sense, not unique to the current occupant of 1600 Pennsylvania Avenue, that we can simply demand obedience from others, and expect that nearly all will comply.

That is what power is actually all about: The ability to produce an effect.

We often confuse power with strength — which we have a lot of. And, since we have the most capable military and the largest economy in the world, we come up with excuses when we don’t get what we want. It must be because our leaders are stupid, or we’re not trying enough, or the other guy is cheating.

That isn’t the case. The better interpretation is that our strength is not synonymous with power. Or, even more precisely, the type and amount of power that we have is insufficient to obtain all of the things that we want.

It turns out that trying to run the entire world with less than 5 percent of its population and less than a quarter (and perhaps as little as 15 percent) of its economic output is really hard — and, indeed, impossible.

U.S. foreign policy makers struggle to get their heads around this fact. No phrase in the Trump strategy document better captures this arrogance than the following:

Imagine a statement like that for any other region of the world:

“our vision of Africa does not exclude Nigeria”

“our vision for South America does not exclude Brazil”

“our vision for Europe does not exclude Germany — or Russia”

We, the United States of America, have concluded that China gets to be included in the Asia‐​Pacific region.

Contrast that concession (if it can be called that) with the underlying assumptions of the previous cold war. There was, after all, a refreshing clarity to what containment of the Soviet regime aimed for: the collapse of the communist government in Moscow, and throughout the Soviet republics, plus the demise of Moscow’s proxies in Eastern Europe and in the so‐​called Third World. The architects of that strategy thought that the entire system would fall of its own weight, so long as it was contained. Eventually, the Soviet Union would just go away.

The Trump administration’s “strategic approach” claims to not want that for China. Indeed, it is quite explicit on that score. e.g. “Our approach is not premised on determining a particular end state for China” or “We do not seek to contain China’s development.”

But the tenor of the document suggests that the nature of the Chinese regime is so fixed, and the scale of its crimes against humanity so grave, that, from a practical perspective, very little accommodation is possible or should be allowed. (And, again, the document was written before the Trump administration changed course on Hong Kong in order to pressure Beijing for its actions, and also before Beijing’s worrisome change in tone vis‐​à‐​vis Taiwan.)

That harsher stance toward China, reflecting an inability to reconcile with Beijing, is reflected in a memo by the National Republican Senatorial Committee, which advised candidates “Don’t defend Trump, other than the China Travel Ban — attack China.” Former Vice President Biden reportedly aims to “out‐​tough” Trump on China in the coming presidential campaign.

This makes me very nervous. But I’m not the only one.

But, at one point, Kempe asked Rubenstein about China. The Atlantic Council summarized the exchange:

“This is by far the most important bilateral relationship in the world,” [Rubenstein] said, expressing fear that Washington‐​Beijing ties will worsen before they improve. “You’re going to see people blaming China for a lot of what’s happened. Whether that’s fair or not is another issue, but people running for office won’t see any downside politically. I think it’s important that we not let political exigencies overcome us, and make sure this relationship stays intact.”

There’s no question, he said, that China is playing a much bigger role in Europe, Latin America, Africa, and the Middle East than it did thirty years ago. But that makes perfect sense from the Chinese point of view…considering that for much of world history, China was the world’s dominant political and economic superpower.

“It’s only in the last 100 years or so they’ve fallen down. Now they’re just regaining their rightful position,” he said, noting that this has coincided with a sharp drop in US influence. “After World War II, we were 50 percent of the world’s gross domestic product (GDP). Today we’re at 18 percent. We just cannot do the things we once could afford to do, and politically we can’t get away with it.”

I wish more foreign policy experts approached the question — what to do about China? — from that perspective.

A strategic approach to any problem must be oriented around reasonable expectations. In the case of China, that starts with the realization that China — unlike the Soviet Union — isn’t going to just go away.

This article by Christopher A. Preble first appeared in CATO on May 28, 2020.