West Point: Where the Best Army on Earth was Built 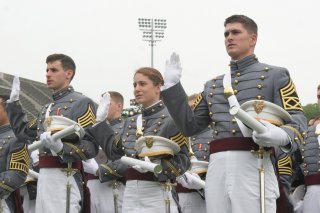 Here’s What You Need to Remember: After the war, several soldiers, as well as legislators, saw a need to eliminate America's reliance on foreign engineers and artillerists and called for the creation of an institution devoted to the arts and sciences of warfare. In 1802 President Thomas Jefferson signed legislation that established the United States Military Academy.

Before becoming the site of the first military academy, West Point served as a crucial fortification – chosen because of its commanding presence on the west bank of the Hudson River. During the American Revolution General George Washington considered it to be the most important strategic position and had Thaddeus Kosciuszko, one of the heroes of the Battle of Saratoga, design the fortifications.

This included forts, batteries and redoubts, as well as a 150-ton iron chain that was placed across the Hudson to control the river traffic. The Fortress of West Point, which served as Washington's headquarters in 1779, was so well constructed and fortified that the British never mounted an assault. Instead, efforts were made to have Benedict Arnold surrender the fort to the British, but the plot was discovered and West Point has never fallen to an enemy. West Point remains the oldest continuously occupied military post in America to this day.

After the war, several soldiers, as well as legislators, saw a need to eliminate America's reliance on foreign engineers and artillerists and called for the creation of an institution devoted to the arts and sciences of warfare. In 1802 President Thomas Jefferson signed legislation that established the United States Military Academy. The first superintendent was Jonathan Williams, who was a prominent scientist and relative of Benjamin Franklin, yet had no previous military experience. He was made a colonel and later served as the first head of the Army Corps of Engineers.

One interesting side note is that despite the fact that fortifications were constructed on that spot the U.S. government didn't own the land. In 1790, Secretary of the Treasury Alexander Hamilton purchased the land on which West Point sat from original owner General Stephen Moore of North Carolina in 1790 for $11,085.

It was Colonel Sylvanus Thayer who is today remembered as the "Father of the Military Academy," as he served as superintendent from 1817 to 1833, and during that time he upgraded the academic standards, instilled military discipline and emphasized honorable conduct. He also noted the need for engineers and made civil engineering the foundation of the curriculum.

Many officers on both sides of the American Civil War had attended West Point, and this included such generals as Grant, Sherman and Jackson. General Robert E. Lee has also not only attended West Point, but he had been superintendent as well. During his tenure, he improved the buildings and extended course curriculum.

During the post-Civil War, with the development of other technical schools, the curriculum was again broadened beyond and with the creation of the U.S. Army's post-graduate command staff schools, the Military Academy at West Point came to be viewed as the first step in a continuing Army education program.

The first African-American cadet was admitted in 1870, and it would be another 106 years until 1976 when the first female cadets were admitted. Sixty-two women were in the graduating class of 1980.

Today the West Point Museum is housed in the renovated Olmsted Hall, which was on the grounds of the former Ladycliff College, which was founded in 1933 but closed its doors after the 1979-80 school year. This houses the collection, which is on display on three floors and includes more than 2,000 small arms.