What’s With the Crayons? Why the Marines Take a Lot of Heat 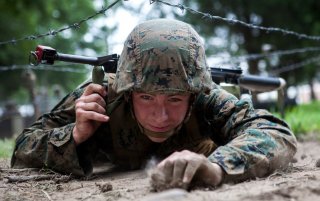 If you were to ask me directly if Marines eat crayons, my personal answer would have to be yes… But there are some mitigating circumstances.

If you’ve spent some time in uniform, you’re probably already familiar with a bit of inter-service rivalry. Sure, we all pick on each other in the Marine Corps, but not nearly as harshly as we may pick on some of our sister branches, and vice versa, of course.

For most service members and vets, this smack-talking comes with no real animosity. In fact, for a lot of us, it serves as a low-level form of social bonding. If I’m having lunch with some Soldiers I’d only just met, we might each poke a bit of fun at one another’s (and our own) branches to break the ice. These jokes aren’t necessarily indicative of any real issues with a branch, but rather are meant to make light of popular misconceptions regarding our respective professional qualifications and our roles in the overall defense apparatus. 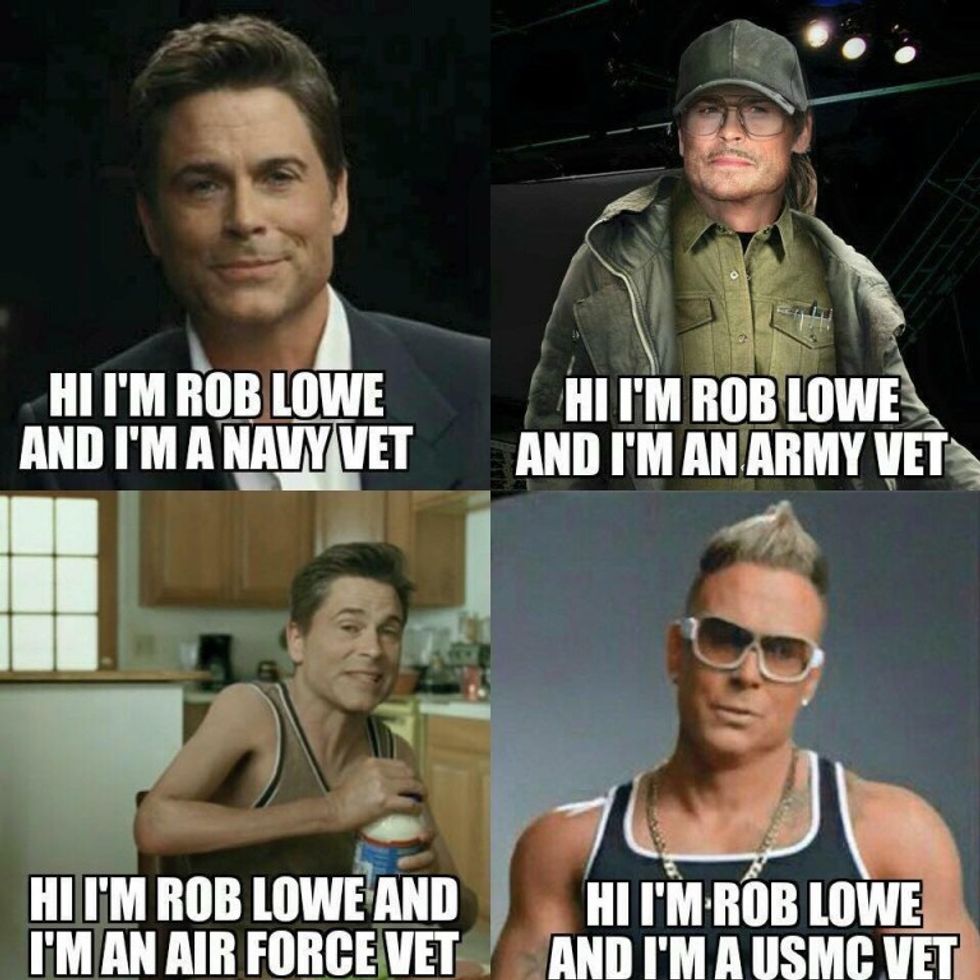 That’s a long winded way of saying we talk a lot of crap, but if anyone that hasn’t been issued a set of dog tags tried to chime in, we wouldn’t have it. Picking on each other in good faith is something we earn through our shared experiences in uniform.

With that said, the common stereotypes we trade on are as follows: Marines are stupid, Soldiers are fat, Airmen are lazy, and the Navy is soft. There are plenty of variations on each theme (some less safe for work than others). Of course, none of these insults are accurate in a branch-wide sense, but we all know that picking on your friends is less about accuracy and more about landing the joke.

Of these stereotypes-in-jest, the one I’m obviously most familiar with is the classic, “Marines are dumb,” vein of humor–because I still hear them about as often as a veteran as I did on active duty. It comes in a variety of forms—from unflattering uses of the name “Jarhead” (originally coined because of our haircuts) to jokes about ASVAB waivers (suggesting the Marines will take recruits that fail to reach the minimum score of 32 on the ASVAB test). By far, however, the most popular way to insult a Marine’s intelligence is to call him or her a crayon eater. 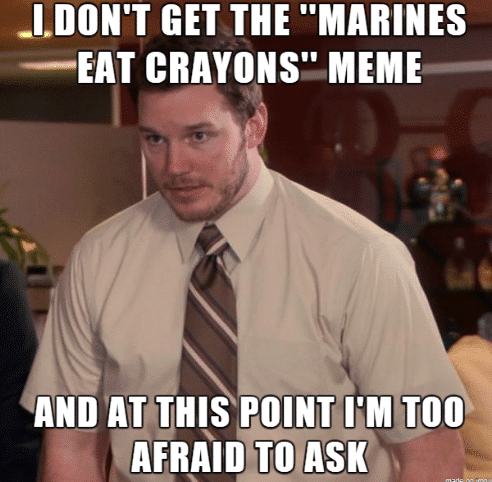 There are a lot of things you could attribute to the start of the joke that Marines are dumb enough to be “Crayola gobblers” — or, in other words, about as smart as a hungry toddler. The truth is, the Army actually accepts recruits with a slightly lower ASVAB score than the Marines will allow, but because the minimum score requirements for each branch are 32 and 31 (out of 100) respectively, neither branch can be too boastful about our testing requirements. 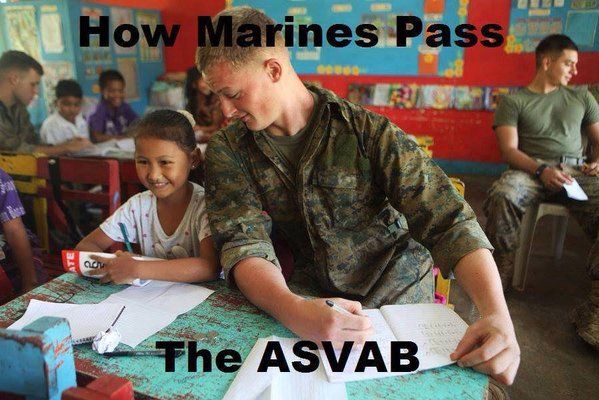 My real problem here is this guy’s sleeves.

The real “dummy” reputation the Marine Corps harbors is, in many ways, based on the very things that make so many of us proud to wear the Eagle, Globe, and Anchor in the first place. Marines pride themselves on being the first to fight (at least sometimes, eh Army?), but that drive leads some to call us foolhardy. Marines have extremely strict clothing regulations, both in and out of uniform–leaving some to criticize our seemingly relentless dedication to even the smallest of orders and regulations. To those of us in the Corps, however, that relentless dedication to orders is a serious point of pride.

Which brings us back to the crayon thing. I have never once been called any variation of “crayon eater” with even the slightest bit of malice in the delivery, but it’s so common a joke now that even those who never served have come to recognize it online. In fact, it’s so common that while I was attending a press event in Las Vegas a few years ago at SHOT Show, someone paid a waiter to carry out a fancy tray full of large crayons for the two of us Marines attending the event as guests. 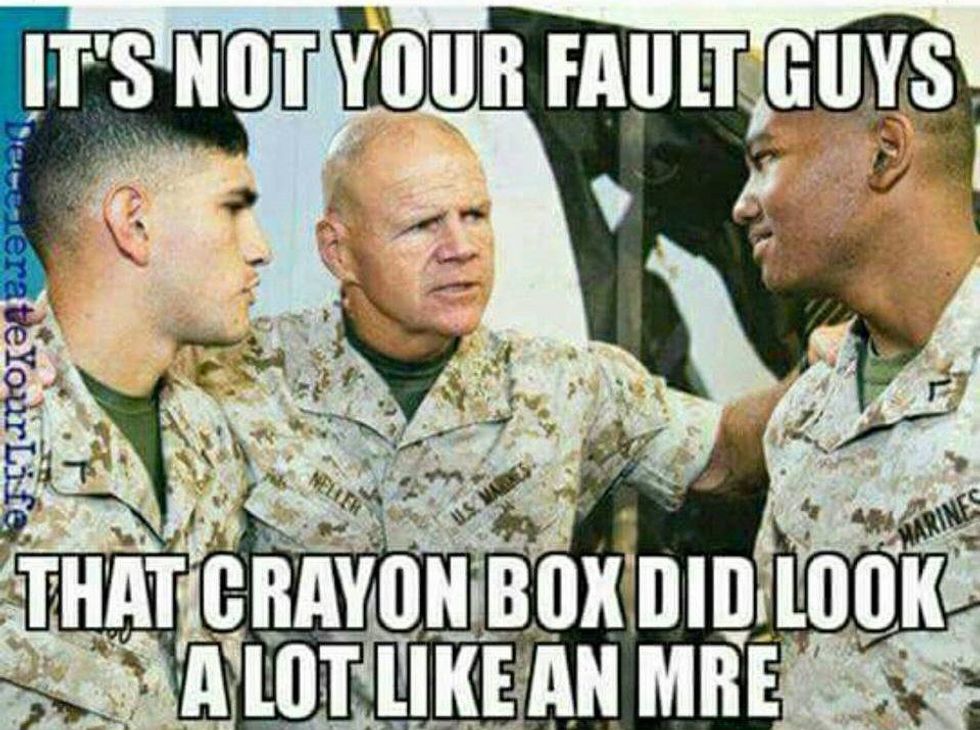 The joke played well in a room full of veterans, service members, and defense media types — and as the tray made its way up to us, I made a command decision.

I stood up and waved to our audience, politely picked up a red crayon from the tray, and I ate the damn thing.

The decision prompted cheers from the crowd and the nod of approval from the other guys I spotted in the audience with the tell-tale high and tight hair cut. Sometimes the best way to take a joke is to lean in, and to remember that we’re all really on the same team here.

Besides, red crayons taste the best.

What’s your favorite bit of inter-service smack talk? Sound off in the comments below, but please, let’s keep things safe for work in here. Our jokes, as always, should come from a place of mutual respect and camaraderie. Save the spicy ones for the squad bay.