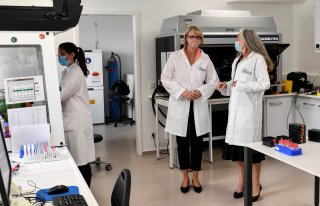 Unlike doctors and veterinarians, who typically focus on treating one patient at a time, epidemiologists focus on big groups of people or animals. We try to prevent the spread of diseases.

That means I study and teach students how to keep communities of people and clusters of animals healthy.

Epidemiologists need to know a lot about health and diseases. They also need to like math and working with numbers. Not all of us are doctors or vets.

Have you ever seen a big maze of dominoes? When one domino gets knocked down, it knocks down another and another. Eventually, all or most of the dominoes have been knocked down. Now imagine that each domino represents a healthy person. A fallen domino is someone who is sick.

Epidemiologists have the hard job of figuring out how the dominoes could be slightly rearranged to stop as many as possible from falling over.

We try to figure out which domino fell first – creating the problem – and also how to stop the resulting cascade of sickness.

Another way to understand what people like me do for a living is to see epidemiologists like detectives who try to put pieces of a story together to tell a whole tale.

This includes trying to understand why some people get a particular disease, and others don’t. However, epidemiologists also get involved when a disease starts affecting a large number of people.

When this happens, it may be called an “epidemic.” Or, if the disease affects the whole world, as is the case today with COVID-19, we call it a “pandemic.”

When those events happen, epidemiologists study how the disease is spreading among people, and what symptoms it is causing. The ultimate goal is to figure out how to prevent the disease from affecting more people. People like me also try to predict how many people will be affected, and when. This helps doctors, nurses and hospitals know they need to get ready to care for those sick people.

We do lots of things besides study infectious diseases – illnesses you can catch from someone else, such as measles and the flu. Epidemiologists helped discover things like the fact that smoking causes cancer and that air pollution makes asthma worse.

Of course, many doctors may have independently noted that several of their patients who smoke get cancer. But experts had to look at hundreds or even thousands of records to prove that smoking was the cause.

Epidemiologists work on any kind of puzzle where a disease is afflicting large numbers of people, whether it is the flu, COVID-19 or lung cancer.

This article is republished from The Conversation under a Creative Commons license. Read the original article.​