What are American Special Forces Troops Teaching the Taiwanese Military? 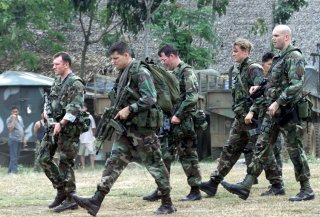 Here's What You Need to Know: Taiwanese military officials would be focused on repelling any kind of Chinese amphibious assault operation, a scenario likely to involve close contact with an arriving enemy.

Are U.S. Special Operations Forces and U.S. Marines quietly training Taiwanese forces in preparation for some kind of war with China?

It is unlikely that the Pentagon would formally confirm this type of operation. The Wall Street Journal was only able to provide details about it through military sources.

China is likely unhappy with the news. A report in the Chinese government-backed newspaper the Global Times says the Chinese Foreign Ministry vowed to take “all necessary measures to safeguard the country’s territorial integrity” regarding their claims to Taiwan. The “US should abide by the one-China principle and stop arms sales to Taiwan,” according to the Global Times.

“The one-China principle is the political foundation of China-US relations. . . .In the communiqué on the establishment of diplomatic relations between China and the US, the US clearly pledged to only maintain cultural, commercial and other unofficial ties with Taiwan,” the Global Times added.

Should U.S. Special Forces be training Taiwanese troops, then what would they be teaching them? Certainly, Taiwanese military officials would be focused on repelling any kind of Chinese amphibious assault operation, a scenario likely to involve close contact with an arriving enemy. The possibility of a Chinese amphibious assault is one reason why the Taiwanese are acquiring U.S.-built Abrams tanks. Taiwan may need to slow down an approaching amphibious landing long enough to enable the United States and other allies to join the fight. However, apart from the seemingly obvious or self-evident idea that Taiwan would want to stop any kind of Chinese attack, there may be other interesting reasons why U.S. Special Forces might train Taiwanese counterparts. Perhaps small reconnaissance, scout or strike teams could be trained for amphibious warfare operations in small island areas such as the South China Sea. Air-assault raids, mounted vertical maneuver of small units behind enemy lines for intelligence and surveillance missions, or quick strike operations on high-value targets may also be contingencies of significance to Taiwan.

There is an increasingly vital sea-land, island-hopping strategic approach in the Pacific region. This includes the growing exploration of amphibious attack and reconnaissance operations in the South China Sea and other coastal regions and island areas. It seems wise to prepare small special operations-type teams in Taiwan to perform high-risk missions that are at times conducted by Navy SEALs, Green Berets and other Special Operations Forces.

Last week the Global Times reported that the “Chinese Ministry vowed to take all necessary measures to safeguard the country’s sovereignty and territorial integrity.” The ministry has “urged the US to fully recognize the high sensitivity of the Taiwan question, following US media reports that there were two dozen US troops deployed on the island of Taiwan, helping train local troops in secret,” according to the Global Times.