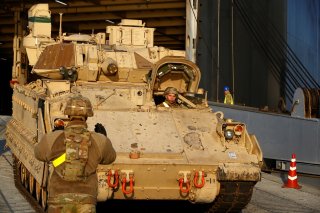 The Army’s Optionally Manned Fighting Vehicle (OMFV) will fight as an armed, manned infantry carrier as well as a robot vehicle able to operate drones, test enemy defenses, and lead attacks through incoming fire. The Army intends to have it deployed by 2027 with several milestones arriving in the next few years.

The Army plans a multi-phased approach to select the producer of the OMFV. The program includes digital engineering, prototyping, live-fire testing, and manned/unmanned teaming.

The OMFV will be designed as part of the Army’s Next Generation Combat Vehicles Program. New weapons, advanced electronics, and precision sensors are expected to deliver a faster, lighter, more lethal vehicle than the Bradley Infantry Fighting Vehicle it is replacing. It’s also expected to be better networked with other systems on the battlefield.

While the existing Bradley is made by BAE Systems, a wide field of competitors have emerged in the OMFV program. Oshkosh Defense is known for tactical vehicles such as the M-ATV Mine-Resistant Ambush Protected Joint Light Tactical Vehicle and larger tactical trucks. American Rheinmetall Vehicles is known for producing heavier armored vehicles.

General Dynamics Land Systems makes the M1 Abrams Main Battle Tank, among several other vehicles. It plans to draw on its experience producing armored combat vehicles to engineer a highly-networked and mobile OMFV.

“The GDLS OMFV concept will provide significantly improved capabilities to survive, move, shoot, and communicate,” said Ray Kiernan, Program Director, Next Generation Combat Vehicles for General Dynamics Land Systems, in an email to the National Interest in July. “Within the (Army Brigade Combat Team) formation, the OMFV concept will transform the battlefield as the key building block necessary to establish a multi-domain common operating picture that allows manned and unmanned platforms to seamlessly share actionable information in real time and vastly improve the effectiveness of the Armored Brigade Combat Team.”

The OMFV will be refined using digital engineering before undergoing live-fire testing. Many key weapons performance parameters can be effectively assessed and refined through digital modeling and simulation. The process can improve developmental efforts by streamlining engineering and prototyping before vehicles are actually built. Multiple different design options can be studied and tested before vehicles are constructed.

“We are going to take whatever they (industry) hand us and put that through modeling and simulation. The whole intent is to inform future requirements and not put a nail in any requirement until we have to,” Maj. Gen. Ross Coffman, Director of Army Futures Command’s Next Generation Combat Vehicle Cross Functional Team, said in a press release earlier this year. “Once these designs are completed, our soldiers will engage with the designs and will provide feedback and input to ensure we are providing the equipment they need to defend our great nation.”