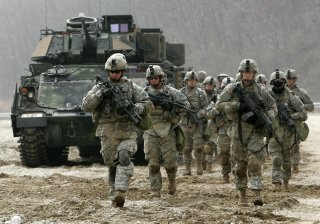 The Army’s new Optionally Manned Fighting Vehicle (OMFV) will introduce new levels of robotics, sensing, targeting and networking technologies. It will be able to launch and operate drones, dispatch infantry into the incoming enemy fire for a close-up assault or maneuver into mechanized armor attack positions.

Leaders of the Army’s emerging OMFV infantry carrier say the platform will function as both a robotic platform and as a manned armored vehicle as dictated or required by mission demands. The vehicle is now entering a new digital design phase and is slated to begin production in 2027.

Following an intense competition, the Army’s Next Generation Combat Vehicles Cross-Functional Team selected five companies to surge into the next developmental phase of the infantry carrier. These companies will build and deliver digital designs of the OMFVs to the Army. The Army has awarded deals to  Point Blank Enterprises, Inc.; Oshkosh Defense, LLC; BAE Systems Land and Armaments L.P.; General Dynamics Land Systems, Inc.; and American Rheinmetall Vehicles, LLC. The total award value for all five contracts is approximately $299.4 million, according to an Army statement.

The new platform, part of the Army’s emerging family of Next-Generation Combat Vehicles, seeks to incorporate the service’s new vision for modern Combined Arms Maneuver. New weapons and sensing precision and ranges coupled with advanced electronics and engineering are expected to deliver a faster, lighter-weight, more lethal and much better-networked vehicle than the Bradley Fighting Vehicle it is replacing.

“The OMFV will bring a transformative change to the battlefield, providing new technology and new capabilities to our formations,” said Maj. Gen. Ross Coffman, director of the Next Generation Combat Vehicles Cross Functional Team. “Once these designs are completed, our Soldiers will engage with the designs and will provide feedback and input to ensure we are providing the equipment they need to defend our great nation.”

This first digital design phase will lay down a technical and conceptual roadmap for an initial OMFV requirements document. These requirements will evolve and continue to be refined in the coming years. Some of the early concepts offered by the Army include advanced levels of autonomy, such as the ability to operate drones, the ability to operate with lethality in “close combat” circumstances in either a manned or robotic capacity, and the ability to achieve what Army developers call “positional advantage.”

Many of the main competitors, such as General Dynamics Land Systems (GDLS), say their offering will bring something unique and unprecedented to the competition. GDLS, which builds the well-known Abrams tank, emphasized maneuver capabilities and networking technologies that seek to align with the Army’s vision for a versatile and extremely lethal armored vehicle able to instantly connect with drones, aircraft, ground vehicles and even dismounted forces.

“The GDLS OMFV concept will provide significantly improved capabilities to survive, move, shoot, and communicate. Within the ABCT formation, the OMFV concept will transform the battlefield as the key building block necessary to establish a multi-domain common operating picture that allows manned and unmanned platforms to seamlessly share actionable information in real time and vastly improve the effectiveness of the Armored Brigade Combat Team,” Ray Kiernan the program director of Next-Generation Combat Vehicles General Dynamics Land Systems, said in an email to the National Interest.