Russia's Military Has No Big Weakness: No Stealth Bombers (Yet) 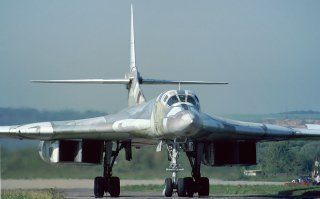 Russia’s move to publish photos and weapons of three of its bombers appears to be an overt and deliberate show of massive strength, as the bombers are photographed with an entire identifiable payload laid out in front of them.

Perhaps Russia is trying to show that its force is deeper, more advanced, and more lethal than a U.S. B-1B bomber and B-52. None of the three aircraft shown, the Tu-160 Blackjack, Tu-95MS Bear-H, and Tu22 Backfire-C appear super stealthy per say, and the emerging Russian PAK DA stealth bomber is expectedly not shown. The T-160 Blackjack does look a little stealthy given its slightly rounded or blended wing-body, however it looks much more like a B1-B than a super stealthy bomber. The pictures, released by the Russian Ministry of Defense,  appeared in an interesting report by The Drive.

There is no question that, taken together, the display of bombing firepower is quite significant and potentially quite threatening given the expected retirement of the B-1B bomber in coming years.

Just how threatening are these bombers? Of course, that depends in large measure upon the size of their fleet, however, there are also some interesting additional variables to consider. For example, how might this line-up compare with the U.S. bomber fleet plans. The U.S. Air Force has been quite vocal that the service faces a massive “bomber deficit,” in terms of numbers, yet that is something there are fast-tracked efforts to correct. The overall strategy, Air Force leaders explain, is to incrementally and slowly retire the B-1B and ultimately the B-2 as sufficient numbers of B-21s arrive. The B-21 is extremely significant here, as the program’s success and need for the new bomber are both significant, circumstances which are inspiring a current effort to greatly increase the number planned and also potentially “flex” in terms of accelerating bomber production.  The B-1B, and especially the B-2, are being massively upgraded with new weapons, computing and sensors to ensure that they stay relevant, lethal, and viable for many years to come as part of a deliberate and clear effort to sustain an extremely capable and lethal fleet until large numbers of B-21s are here.  While originally part of an Air Force plan to acquire 100 new B-21 bombers, that plan may now be massively expanding up to a total of 150 or more.

Then there is the question of the B-52, a huge factor weighing upon the power and impact on the U.S. bombing fleet. Yes, the B-52 is an old airframe, which might someday be fully replaced by an entirely new large-bomber platform. However, it is important to bear in mind that the prevailing assessment among senior Air Force and Pentagon weapons developers is that the B-52 airframes themselves are extremely viable and sustainable for decades into the future. Added to this factor is the reality that virtually everything else about the B-52 is entirely different and new compared with the earlier days of the bomber. Of course, it is getting new, high-tech precision weaponry, but they will go into an entirely revamped internal weapons bay which massively increases the B-52 payload capacity. The B-52 is also being re-engined and has digital avionics along with a new communications system for real-time intelligence gathering.

Given all this, there are clear grounds upon which to question any Russian claim of bomber superiority, when considering both the current and anticipated future U.S. bomber fleet.